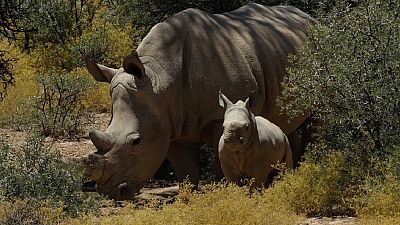 It was one of the most momentous events in the battle against poaching: 11 giant pyres of elephant tusks going up in flames in Kenya as the world looked on.

The largest-ever destruction of ivory, which took place in April, was the pinnacle of efforts to jolt mankind into stopping the slaughter of wildlife, while sending a powerful message to poachers.

As 2016 draws to an end, awareness of the devastation of poaching is greater than ever and countries have turned to high-tech warfare — drones, night-goggles and automatic weapons — to stop increasingly armed poachers.

“We obviously still have a very long way to go, but the level of political awareness we have reached is remarkable compared to 6 years ago,” said John Scanlon, secretary-general of the International Convention on International Trade in Endangered Species (CITES).

Poaching was somewhat of a niche concern until around 2010 when the massacre of elephant and rhino began reaching such levels that conservationists and wildlife activists realised more had to be done to give the problem wider attention.

High-profile names including Britain’s Prince William were recruited to the cause, while calls grew louder for a total global ban on the ivory trade.

The move is slowly paying off, and 2016 saw hopeful signs that people may no longer be willing to watch as extinction goes unchecked.

China is the main source of global demand for ivory and in March the government announced a ban on new ivory imports.

Then, in early October, CITES strengthened protection of other threatened species, including sharks, pangolins and grey parrots.

They argued that any legal sale stimulates demand and therefore the illegal trade.

Elephant and rhinoceros, known as the ‘charismatic’ species, are often the poster children for the anti-poaching movement, tending to draw the most attention.

“The elephant is a flagship for the wider ecosystem,” said Kelvin Alie of the International Fund for Animal Welfare (IFAW).

“When you protect the elephant and its habitat, all the species living in this habitat benefit from this action.”

Worth more than gold

However some argue the future still looks gloomy.

“We should not think that the problem is solved because we have recorded a few successes here and there,” said Mark Gately of the Wildlife Conservation Society.

Elephant populations are stable, or even increasing, in South Africa, Botswana, Uganda, parts of Kenya, Zambia, Zimbabwe, Malawi or the W-Arli-Pendjari complex extending over Benin, Burkina Faso and Niger.

But elsewhere they are declining rapidly, and sometimes catastrophically.

According to the International Union for Conservation of Nature (IUCN) the African elephant population has recorded its biggest drop in a quarter century, with an estimated population of 415,000 elephants, 111,000 fewer than a decade ago.

And the killing continues at the dizzying pace of about 30,000 elephants a year.

The rhinoceros fares worse. Black market rhino horn sells for up to $60,000 (57,000 euros) per kilogram — more than gold or cocaine — and in the last eight years alone roughly a quarter of the world population has been killed in South Africa, home to 80 percent of the remaining animals.

CITES estimates the illegal wildlife trade to be worth $20 billion (19 billion euros) a year, making it the fourth biggest illicit activity after guns, drugs and human trafficking.

Some African countries have made the fight against poaching a priority, but others believe there are more important problems on which to spend scarce resources, such as ending conflict, poverty, unemployment or hunger.

“I think it’s unfair just to leave it to African countries to take care of that problem, it’s an international issue… and it applies to thousands of species across the planet,” said Richard Vigne, director of the private Ol Pejeta conservancy in Kenya.

As an example, with attention fixed on elephant and rhino and gorillas, there was widespread shock as it emerged this month that the humble giraffe had seen numbers plummet by 40 percent and was now also vulnerable to extinction.

“The good news is we now know what we have to do, but we have to multiply the scale of our actions,” said Scanlon.

Part of that is the increasing use of technology, intelligence and weaponry as well as coordination with customs and police services, the adoption of laws with heavy penalties for poachers and a growing number of cross-border agreements to halt trafficking.

“We need a holistic approach. If we deploy armed rangers on the ground, we also need to reduce the demand for ivory and explain to local communities there is economic interest in protecting wildlife,” primarily through tourism, said Andrew McVey of the World Wildlife Fund (WWF).

Across Africa drones, night-vision equipment, helicopter-borne intervention teams, automatic weapons and special forces trainers are all being brought in to stop the poachers.

“This is a war, this is an unfortunate part of conservation … We can’t walk around in the bush with a stick, gently asking the poachers to drop their AK-47,” said Damien Mander, an Australian ex-soldier who heads the International Anti-Poaching Foundation (IAPF).