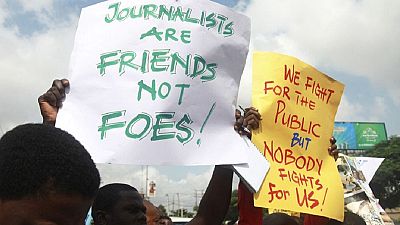 Anglophone journalists in Cameroon have condemned a government order banning all radio and television discussions on the political situation in the English-speaking South-West Region.

This is what the Anglophone media in Cameroon is facing. pic.twitter.com/cn3Yug7RdR

If this is an attempt to stop us from talking, then It is wrong. And we of CAMASEJ will not give in to that.

The President of the Cameroon Association of English-Speaking Journalists (CAMASEJ) Simon Lyonga expressed dissatisfaction with the order targeting all media houses.

“It is rather pitiful and regrettable that in this era of a universal free press some administrative authorities and their subordinates could think of dictating what the press should publish, he said in a statement published on his Facebook page on Thursday.

…And they strike back… pic.twitter.com/jkOJ09ERdc

He made reference to summons issued to three Anglophone journalists in the region who had issued a statement calling on the government to include English in official communications.

“It is with dismay that we learnt of the summon of three of ours by the governor of the south west region to instruct them to stop any further publications on the recent problems in Anglophone Cameroon. A few hours after we saw this ‘unfortunate’ letter banning all discussions on the struggle from the airwaves,” Lyonga explained.

Simon Lyonga stressed that the association will not follow the order and advised members to be responsible in their statements and desist from hate messages.

“If this is an attempt to stop us from talking, then It is wrong. And we of CAMASEJ will not give in to that. Meanwhile we are calling on our members and fellow colleagues to be responsible enough and desist from spreading hate speech (not the case for now),” he advised.

He maintained that they will remain responsible journalists and report what they see.

There have been heightened protests and violent clashes in the past week in Cameroon’s only English-speaking North-West and South-West regional capitals of Buea and Bamenda.

Thousands of teachers and lawyers in the regions went on strike, accusing the government of trying to marginalise them by imposing the French language on their schools and courts.

Demonstrations were halted by security forces after they beat up some university students with the incidents captured on camera and circulated online.

An Anglophone member of parliament, Joseph Wirba, spoke against the injustices in the region during a parliamentary session.