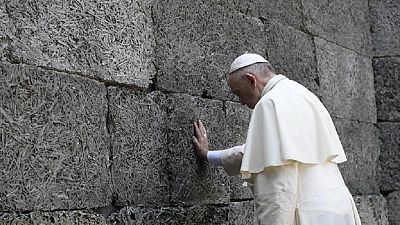 Pope Francis II has urged people of the Democratic Republic of Congo (DRC) to maintain peace despite deep seated division on the issue of elections that should have been held later this month.

The Pope’s admonition was contained in a message to the National Episcopal Conference of Congo (CENCO). CENCO has convened a day of prayer for peace in the DRC, slated for this Sunday, November 20, 2016, a day coinciding with the closing of the jubilee year of mercy.

‘‘I encourage everyone, especially the political and religious leaders, to initiate or pursue any action aimed at building bridges between you and not walls, to establish in Congolese society a culture of dialogue that will make you better and to love each other.

I encourage everyone, especially the political and religious leaders, to initiate or pursue any action aimed at building bridges between you and not walls, to establish in Congolese society a culture of dialogue that will make you better and to love each other.

‘‘I also invite the leaders to a courageous commitment to the common good, to forgetting oneself and to building a prosperous and pacified nation.

‘‘May this living hope of a better future never be extinguished in your hearts. I invoke on your country the protection of the Virgin Mary, Queen of Peace, and I employ the abundance of divine benedictions,’‘ the statement issued on Thursday concluded.

The Holy Father met President Joseph Kabila at the Vatican during a private audience in September. Vatican sources reported that particular attention was paid to the challenges posed by the tense political situation and the recent deadly clashes that occured in the capital, Kinshasa.

The latest political development in the country is the naming of a new Prime Minister as per the government’s peace deal with a section of the opposition. Opposition leader Samy Badibanga was named Prime Minister to replace Augustin Matata Ponyo who resigned earlier on in the week.

President Kabila whose second and final term runs out at the end of this year is expected to stay on till April 2018 when fresh elections are held. The electoral body cited the lack of a credible register as one of the key reasons for postponing the polls.

The main opposition group led by Etienne Tshisekedi however insists that they will hold protests aimed at demanding that Kabila leaves office later this year.

In a statement Tshisekedi said, “With the expiry of his second and last term, Joseph Kabila will not violate Article 220 of the constitution as regards the number and duration of the presidential term.”