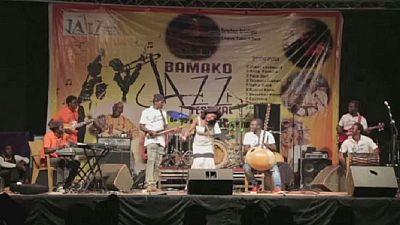 Mali, once known as the “Mecca” for musicians, has seen its arts scene take a nose dive since a 2012 coup ousted Amadou Toumani Toure’s government.

Famed for its music, festivals and ancient literary prowess, the west African nation has over the past five years tried to attain some sort of stability without much success.

The country’s music scene however appears to be on the rebound with the successful debut of the Bamako Jazz Festival.

The event originally scheduled for last year, had to be canceled after gunmen seized a hotel in the capital and killed at least 27 people.

For three days this November, the city’s residents cast their fears aside and trooped to the French cultural center to enjoy soothing jazz tunes performed by musicians from Mali and beyond.

“We have insecurity, but which country does not have issues with insecurity? We need to come out of the box that says that as soon as there is an incident regarding insecurity, whether it’s isolated or not, that we have to close the door on all entertainment or culture activities,” said the festival’s organizer, Mamadou Diop.

The festival he said “is aimed at helping everyone understand that even if we experience moments of instability, it’s not unique to Mali, it’s like anywhere in the world.”

For some of Mali’s music legends like Cheick Tidiane Seck, the festival provided a platform to showcase the diverse shades of jazz.

“People talk about Afro jazz today and I think we played a big part in make it popular, because clients would come and ask us to play and we would play. If they asked us to play Louis Armstrong then we would even if we added our own twist to it. I would like to think of us as the founders of this little community, which has gone on to inspire other jazz musicians,” he said.

Putting the initial cancellation behind them, the patrons really enjoyed the performances and were equally impressed with the line up of performers which included Chieck Tidiane Seck, Didier Lockwood, Babani Kone and the Nordie Jazz Quartet.

“I really liked everything I saw here, and as an artist it has given me courage to one day play music like them,” said Namisa Tounkara, a music student who attended the festival.

The event’s organizers are hoping to use the festival as a launchpad for other entertainments events in future to revive the country’s art scene.

They are also want to make the Bamako Jazz Festival an annual event that will be marketed across the sub-region.