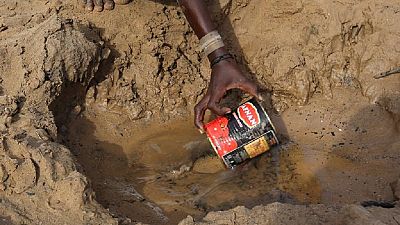 The Somalian President, Hassan Sheik Mohamud has appealed for urgent humanitarian assistance for nationals affected by an acute drought in the country.

A statement released from the presidency on Monday, saw the President call on Somalis in the diaspora and the international community to intervene ‘‘to aid the situation urgently as it is time for action.’‘

“I appeal to the Somali people, wherever they are all over the world to help and stand shoulder to shoulder with their suffering Somali people who lack food and water due to the drought in the country.

I appeal to the Somali people, wherever they are all over the world to help and stand shoulder to shoulder with their suffering Somali people who lack food and water due to the drought in the country.

‘‘The government will also take an important part. The Gu’ season has passed without rains with earlier rainy seasons failing. So, the Somali people need to help one another and help their brothers and sisters with food and water.” he said.

The president further stated that the drought has widely affected the country, but some areas are worse than others, “the drought is everywhere but in particular the drought hardly hit the north western and North Eastern regions of Somalia, of Somaliland and Puntland, where many livestock have already been lost, with people starting dying, in areas the drought is very critical” Hassan Sheik Mohamud added.

According to him, the already bad situation had worsened due to delayed rains. He added that whatever aid comes through the government will also make its input to save the most affected people from starving to death.

Hundreds of Muslims today morning held special prayers for rains in #Mogadishu as the #drought in #Somalia gets worse pic.twitter.com/rpcUzLsQID

The European Union (EU) last month announced a €66.5m aid package to respond to the El Niño and food security crisis in the Horn of African region.

The package of development assistance focuses on the four countries that are most severely hit by El Niño and that are experiencing food insecurity: Ethiopia, Somalia, South Sudan and Sudan.

The breakdown of the funds are as follows:

Aside the issue of drought, Somalia is also suffering from the scourge of terrorism from the Al-Shabaab militant group. The recent withdrawal by Ethiopian troops in some areas have seen the terrorist group take over towns.

The country is currently undertaking its local and legislative elections. The process will lead to the election of a President later this month. The Somali National Army is being helped by the African Union Mission in Somalia (AMISOM) to maintain security.