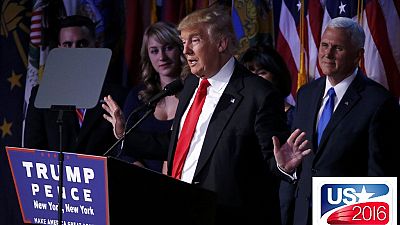 Donald Trump has been officially elected the 45th of the United States of America. He has delivered a victory speech in which he has called for unity and reiterated his stance to ‘Make America Great Again.’

Congratulatory messages have been flying in for the next Commander-In-Chief of the US Armed Forces. Reports indicate that Russian president Vladimir Putin was among the first to send his felicitations. The Indian Prime minister also used twitter to send his congratulations.

African leaders are not being left out. So far there are eight African presidents who have officially sent congratulations via their official twitter handles. The first was Burundian President Pierre Nkurunziza.

Mr. realDonaldTrump, on behalf of the people of Burundi, we warmly congratulate you. Your Victory is the Victory of all Americans.

The second president was Ghana’s John Dramani Mahama, who himself heads to the polls in December this year. ‘‘Congratulations President-elect Donald J. Trump,’‘ Mahama’s tweet read.

The third African leader was Tanzania’s John Pombe Magufuli. He congratulated Trump and the people of America and assured of continued friendship and cooperation of his country with the US.

Congratulation President-Elect Donald Trump and the People of America. Tanzanians and I assure you of continued friendship and cooperation.

Others include Ugandan President Yoweri Kaguta Museveni who posted his message to Mr Trump on his official twitter handle. Kenya’s Uhuru Kenyatta and Hassan Sheikh of Somalia were also not left out.

I congratulate realDonaldTrump upon his election as USA president. I look forward to working with him like I've done with his predecessors.

I sent congratulations statement to the US President Elect, Donald J Trump for being elected as the 45th president of the United States.

“Egyptian President Abdel Fattah al-Sisi congratulated Donald Trump on Wednesday on his victory in the U.S. presidential election and said he hoped his election would unleash a new era of closer ties with Washington,” Reuters news agency also reported.

The government of South Africa issued an official statement in which President Zuma affirmed the country’s resolve to build stronger relations between the two countries.

“President Zuma conveyed his best wishes to the President-elect and looked forward to working with President-elect Trump to build on the strong relations that exists between the two countries.

He underlined that South Africa further looked forward to working closely with the new Administration in the United States in promoting peace, security and prosperity around the world, especially on the African continent,” the statement read in part.

On behalf of the Govt and people of Nigeria, I congratulate President-elect realDonaldTrump on his victory in the US presidential election.

Nigeria congratulates Donald Trump on his election as POTUS and welcomes the spirit of his victory speech. RealDonaldTrump pic.twitter.com/Wwbn4D4Lhv

The Republican Party front-runner and business magnate had secured 288 of the electoral votes against his opponent Hillary Clinton who had managed 218 as at Wednesday morning.

The November 8 election was keenly contested after months of heated campaigns. 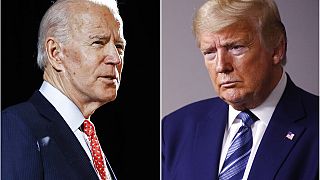