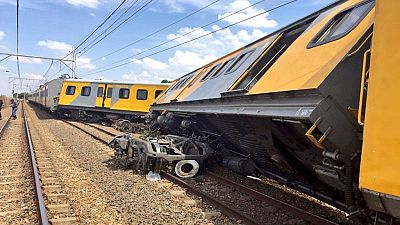 Two trains have collided in South Africa resulting in the death of one person with 122 having sustained injuries.

The collision occured on Monday afternoon between Tembisa and Kaalfontein in the Guateng region on a route known as the East Rand, local news portal, eNCA reports.

A spokesman of the rescue team on the site is reported to have said that over 150 people sustained minor to moderate injuries and would be transported to Tembisa hospital and nearby medical facilities.

Metrorail’s Lillian Mofokeng said, “I can confirm that we have a train collision between Kaalfontein and Tembisa. For now, we are trying to gather information. I am on my way to the scene and it is important that I highlight that the accident happened during our off-peak period.”

The trains are said to have collided on the rail split from Kaalfontein Station towards Oakmoor and Tembisa stations in Esselen Park. Authorities estimate that it would take at least a day to clear the crash site.

The East Rand train route is one of the busiest in Gauteng and carries thousands of commuters travelling between Ekurhuleni, Tshwane and Johannesburg daily.

#TrainCrash – Latest on the trains that collided near Tembisa >> https://t.co/0I92ds7ves pic.twitter.com/AjRMzVM9vz

The most recent rail disaster on the continent is the accident on Friday in Cameroon where according to official records 79 people have lost their lives. In the case of Cameroon however, the train derailed at Eseka station, between the capital Yaounde and the port city of Douala.

The president who has vowed to get to the root cause of the accident declared October 24 a day of national mourning with instructions that all flags across the country fly at half-mast.