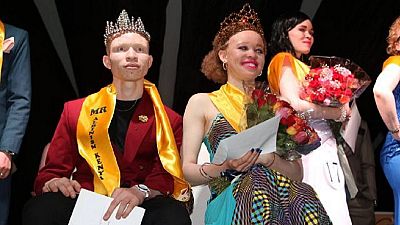 Young persons living with albinism in Kenya on Friday participated in the first Mister and Miss Albinism in the capital Nairobi to demystify their condition.

The Kenyan Albinism Society organised the pageant to celebrate ten years of its existence and to show the beauty in persons living with albinism as well as to do away with stigma associated with the medical condition.

In Africa, people have black skin. When a woman gives birth to an albino, people say it's a curse ... Even the children of your age are afraid of you.

“There are beautiful albinos who feel good about themselves,” an organiser and also the first Kenyan MP with albinism, Isaac Mwaura, said.

“In Africa, people have black skin. When a woman gives birth to an albino, people say it’s a curse … Even the children of your age are afraid of you,” 24-year-old contestant Nancy Njeri Kariuki from central Kenya said after she catwalked wearing a brown wig in the presence of Kenya’s Vice President William Ruto.

The contestants catwalked in professional outfits, from fisherman to soldier through to a rugby player, to show that they too can be part of the country’s workforce as explained by the MP that persons with albinisim are struggling to find work.

We have a programme for people with albinism as we want them to participate in nation building. pic.twitter.com/VJvukTZpUe

Michael Ogochi, a 21-year-old contestant, said the pageant helped him trust himself.

“Growing up was hard for me (…) nobody wanted to be with me … You have to work on your self-esteem and have a thick skin,” he said.

In several countries in southern and eastern Africa, such as Tanzania, Malawi, Burundi and Mozambique, persons with albinism are subjected to numerous attacks.

Some even seek their limbs and other parts of their bodies for rituals believed to bring wealth and luck. This type of attack is however rare in Kenya.

Albinism is a rare group of genetic disorders that cause the skin, hair, or eyes to have little or no color. It is also associated with a number of vision defects.

The first ever Mr and Miss Kenya went to Jairus Jzay and Loise Lihanda respectively.

The first contest for 'Mr and Miss Albino' has been held in Kenya with an aim of boosting confidence of young people with albinism pic.twitter.com/wOZONAoCmd

Mr and Miss Albinism Kenya
With the honourable Isaac Mwaura at the event #BeautyBeyondTheSkin pic.twitter.com/u6TfQZcCeF