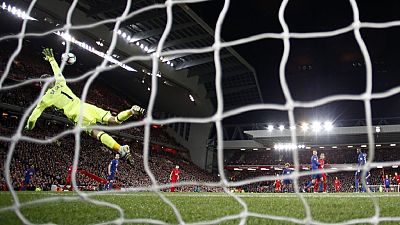 The last fixture for week 8 of the English Premier League (PL) ended in a disappointing draw at Anfield – home to Liverpool.

The hosts dominated the game against Jose Mourinho’s Manchester United but due to the heroics of goalkeeper David De Gea, the game ended goalless. Liverpool however rise to fourth spot with 17 points on the league log.

The Spanish goalie pulled two fine second-half saves to save his side. De Gea dived low to stop Emre Can and athletically kept out Philippe Coutinho’s 25-yard effort.

The draw meant that Liverpool failed to clinch their fifth successive victory in the PL and a chance to go top of the league on equal points with Manchester City and Arsenal. United with 14 points remain in seventh place.

Klopp’ side were restricted by Mourinho’s side who put up a good defensive set up and discipline. United hardly allowed Liverpool to build the momentum and intensity they have garnered in their recent games.

United’s best chance fell to an unmarked Zlatan Ibrahimovic but the Swede directed Paul Pogba’s cross off target. The visitors had just 35% of possession – their lowest in a PL match since Opta began recording the data in 2003-04.

Liverpool manager said after the game, ‘‘I am not frustrated but I am not happy with the performance. No-one will show this game in 10 or 20 years but we could have played better.

“It was a hectic game, interrupted here and there, but we lost patience with our passing game. The attitude of my team was really good. We were ready to fight but when you can play better, you have to.’‘

For his part, Jose Mourinho expressed satisfaction at the result. ‘‘The game was difficult for both teams but for longer periods it was more difficult for them than us.

“We controlled the game not just tactically but the emotion of the game, that was probably the quietest Anfield I had and I was expecting it to be the other way. I think was a positive performance.”