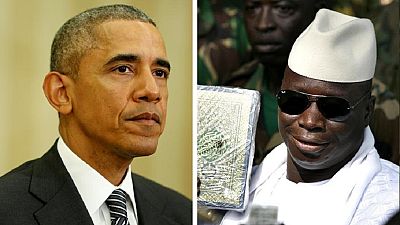 The United States said on Monday that it will not grant visas to members of the Gambian government. The US said its position will remain until a dispute over Gambians awaiting deportation back to the west African nation was resolved.

The Gambia has reportedly refused to accept nearly 2000 people the US is trying to deport. The Washington Times noted that Homeland Security took the move after extensive overtures to the Gambian government were not heeded.

‘‘As of October 1, 2016, the US Embassy in Banjul, the Gambia has discontinued visa issuance to employees of the Gambian government, employees of certain entities associated with the government, and their spouses and children with limited exceptions,’‘ a State Department official said.

A number of Gambians in the United States who are under final deportation orders, after “exhausting” all legal channels that would have permitted them to remain are unable to be deported because the Gambian government has refused to issue them with passport and other necessary documents to facilitate the deportation.

Gambia becomes the first country in the last 15 years to face such a diplomatic penalty. The only time the law was triggered was in 2001 against Guyana. The south American nation complied with US demands within two months after the ban.

“Our country respects the laws of the United States, and we are working closely with the U.S. authorities to take care of the situation,” said Hamba Manneh, counselor at the Gambian embassy in the US.

The US has threatened further that they will extend the ban if the Gambia fails to cooperate. ‘‘It’s time we make clear to these nations that blocking US deportation efforts by refusing to take back their citizens has consequences,’‘ a top senator said.

Reports estimate that over 30,000 Cubans, most of them with criminal records, are awaiting deportation but have been released onto the streets in the U.S. because Cuba refuses to take them back.

China is another major offender, placing high on the list of nearly two dozen recalcitrant countries identified by Homeland Security. The Gambia is ranked No. 11 on that list, according to Jessica Vaughan, policy studies director at the Center for Immigration Studies.

Back home, President Yahya Jammeh, who is hoping to win a fifth term in office in December polls after ruling since 1994. The Gambia has seen large-scale migration which has been blamed largely on high levels of youth unemployment.

A European parliament delegation ended a tour of the country last week by threatening to recommend sanctions if the rights situation did not improve.

“In relation to migration per capita, Gambia has more people coming to the European Union than any country, not in total, but as a proportion of a population of 1.8 million,” said British MEP David Martin said.

“You have more Gambians arriving in Europe than any other nationality. That should send the signal to us that we should be doing more in this country,” added the head of the human rights delegation.