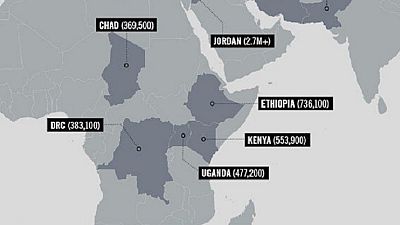 Ethiopia, Uganda, the Democratic Republic of Congo (DRC), Kenya and Chad are among the top 10 refugee friendly countries across the world, according to Amnesty International.

The global rights group in its latest report on the refugee crisis found that the five African countries together with Jordan, Lebanon, Pakistan, Iran and Turkey were accommodating over 50% of global refugees.

The group’s report ‘‘Tackling the global refugee crisis: From shirking to sharing responsibility,’‘ condemned wealthy countries of an absence of leadership and responsibility in tackiling the crisis.

Humanitarian agencies have estimated that some 21 million people are living as refugees. Some in dire need of shelter and others running away from political persecution or conflict situation.

Amnesty noted that the vast majority of refugees are hosted in low and middle-income countries, while many of the world’s wealthiest nations host the fewest and do the least.

“Just 10 of the world’s 193 countries host more than half its refugees. A small number of countries have been left to do far too much just because they are neighbours to a crisis.

‘‘If all – or most – countries were to take a fair share of responsibility for hosting refugees then no one country would be overwhelmed and the lives of refugees would be significantly improved,’‘ the report added.

Some facts worth noting