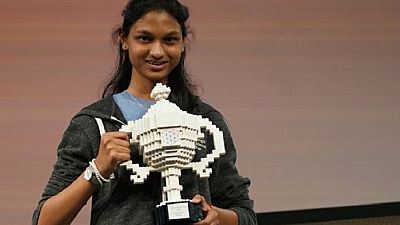 For her scientific innovation aimed at combating drought in her native South Africa, a 16-year old girl, Kiara Nirghin, has been adjudged winner of the Google Science Fair.

Her innovation is aimed at retaining soil water and combating the effects of drought on crops by retaining soil moisture, whilst still recycling waste products of the juice manufacturing industry.

What was her project about?

Her project was titled ‘Fighting drought with fruit.’

She used orange peels to develop a cheap super-absorbent material to help retain water in soil. At a time when southern Africa is suffering from the impact of the El Nino drought, Kiara’s invention will lessen the impact of dryness on crops.

‘‘After conducting three experiments that spanned over 45 days, that tested: the water absorption abilities, resulting soil moisture and growth of a produced plant, given off by Starch SAP (super-absorbent polymers), Pectin SAP, Acrylic SAP and various forms of orange peel variables, I accept my hypothesis.

‘‘The results of the water retention test showed that the ‘Orange peel mixture’ can absorb 76.1% of water, which is significantly greater than the acrylic SAP, starch SAP and pectin SAP.

She stated further that she hoped to apply her solution on fields in South Africa as a means of helping farmers to save money and also save their crops.

Her prize and the award ceremony?

Kiara won a $50,000 scholarship at an event held in California in the United States of America. The competition was open young people between the ages of 13 to 18. She beat peers from around the world to win the contest.

She is from city of Johannesburg and currently attends the St Martin’s High School.

‘‘I absolutely love the captivating subjects of chemistry and physics in school. I have always had a great love for chemistry since I was young.
I vividly remember at the age of 7 experimenting with vinegar and baking soda solutions in plastic cups.,’‘ she said about herself.

“My natural curiosity and questioning nature has sparked my everlasting love of science.

“I also house a great interest in food science and baking. I believe that food and chemistry are undoubtedly linked in the intertwined science web,’‘ she added.

South Africa like other countries in the region is presently experiencing one of the worst droughts in 45 years, with the lowest ever rainfall since 1904. In 2015, South Africa received only an average of 403 mm, which is merely 66% of the annual average rainfall.

This situation led to severe strain on crop production with household food security being a major concern. With their advanced economy, the country has been able to withstand the drought.

Other countries in the region particularly Zimbabwe has had to depend on food aid from international organizations and other countries to be able to feed a section of citizens. Aside farm lands, animals have also been affected.