Fresh evidence of €6.5m fund transfer from Gadaffi to Sarkozy 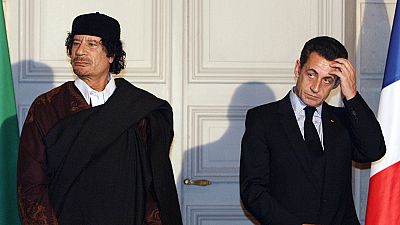 A French news website, Mediapart, is reporting of new evidence in the issue of political funding from Muammar al Gaddafi to former French president, Nicolas Sarkozy.

According to the website, a diary of a former top official of the Gaddafi regime, had records relating to a series of payments to the 2007 campaign of Mr Sarkozy. In total, €6.5 million was believed to have been paid to him on the campaign trail.

A judicial source has confirmed knowledge of the latest piece of evidence and added that the record is being investigated by the judiciary.

Mediapart disclosed the identity of the Libyan official in question as Shukri Ghanem, head of government (2003-2006) and minister of oil (2006-2011), he however defected in 2011. Ghanem was found dead on April 29, 2012 in Vienna as a result of accidental drowning.

According to Mediapart, the payments were made in three tranches. It cited a meeting dated 29 April 2007 at which Bashir Saleh, a former aide of Gaddafi is said to have transferred 1.5 million euros to Nicolas Sarkozy.

A further 3 million euros was purportedly transferred by a son of Gaddafi before the final 2 million was sent by Abdullah Sanussi, the then head of Libyan intelligence service.

A judicial inquiry was opened in 2013 after revelations by a businessman, Ziad Takieddine and other former Libyan officials accusing Mr. Sarkozy of having received money from Gaddafi.

In 2012, Mediapart published a document outlining a tentative agreement forged between the erstwhile Libyan leader and Sarkozy’s teams for funding up to 50 million euros. The authenticity of this document has been contested by Mr Sarkozy’s camp.

Gaddafi, who ruled Libya for close to five decades was killed in 2011 after western forces invaded the country. The north African country has since been split among rivals governments ruling different parts. Insurgent group ISIS have also take advantage to seize parts of Sirte despite a government siege to retake the town.