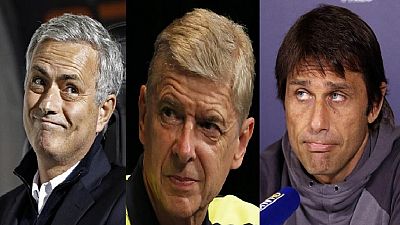 Manchester United returned to winning ways at Old Trafford beating champions Leicester City by four unanswered goals. It was the first time since 2012 that United have scored four times in the first half.

Chris Smalling opened the scoring in the 22nd minute before Juan Mata doubled the score on 37th minute. United’s record signing Paul Pogba grabbed his first goal on his return with three minutes to end of the half.

But before Pogba’s goal, youngster Rashford netted in the 40th minute. Pogba was named man of the match for his duties in the early kickoff. The last time United played at home, they were defeated by City in the Manchester derby.

Leicester however got a late consolation goal through a long range effort by Demarai Gray.

“To be back home and beat the champions is good; last season we couldn’t beat them but this time we have beaten them twice,” Mourinho said after the game.

MOURINHO: “To be back home & beat the champions is good; last season we couldn't beat them but this time we have beaten them twice” #MUNLEI pic.twitter.com/duoEw5m8s7

Alexis Sanchez who was playing his 100th game for the side, opened the scoring in the 11th minute before Walcott also turning up for his 350th game hit a second three minutes later. Ozil scored in the 40th minute to finish off Antonio Conte’s side.

Arsenal boss Arsene Wenger: “I’m very happy. We needed to change the recent history. I think we did it in style and steel” pic.twitter.com/yRuWZcL5Bc

Manchester City meanwhile maintained their perfect start to the season, with their sixth straight win, a 3-1 win over Swansea City.

Argentine Sergio Aguero got two goals to mark his 100th win in the Premier League before Rahim Sterling also added a solo strike.

Pep Guardiola has won his first 6 matches as a #PL manager, equalling the record set by Carlo Ancelotti in 2009/10 with Chelsea pic.twitter.com/uNli6zX3kL

Liverpool were also in rampaging form against Hull City, hitting five goals past Hull. Milner scored two penalties, Coutinho, Saido Mane and Adam Lallana were all on target for the Anfield outfit.

This is how the table looks ahead of the final match of the #PL weekend, Burnley v Watford… pic.twitter.com/XTG1K6V2iM