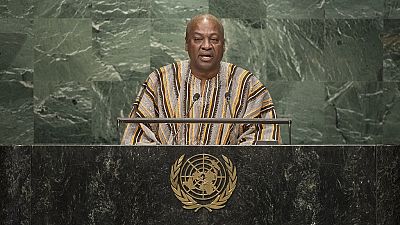 Ghana’s president, John Dramani Mahama, has told the United Nations General Assembly (UNGA) that Africa is a continent on the rise and one that needs fair trade and not the usual aid and development assistance.

‘‘Africa does not need your sympathy or Overseas Development Assistance. Africa needs a fair chance to trade with the rest of the world and amongst ourselves,’‘ Mahama said when he took his turn to address the UNGA on Wednesday.

According to him, one of the underlying factors behind the migration crisis affecting the continent and troubling Europe was the lack of fairness in trade. This he said forces many youth in sub Saharan Africa to sell off their investments and try seeking greener pastures across the ocean.

Africa does not need your sympathy or Overseas Development Assistance. Africa needs a fair chance to trade with the rest of the world and amongst ourselves.

Getting ready for my contribution to the General Debate at the 71st #UNGA. pic.twitter.com/IPII10lwLm

‘‘Some of the young Africans who hazard the desert and Mediterranean Sea to cross to Europe from my country are young poultry farmers or other entrepreneurs who sell their shops and undertake the journey because they can no longer compete with the tons of frozen chicken dumped on African markets annually, or the adverse business environment they have to face,’‘ Mahama said.

In his view, Africa was up to the task of taking care of itself because ‘‘we have the resources in this world to guarantee each person a decent life.’‘

He recalled how the European Union in trying to curb unregulated migration had created an emergency fund of 1.8 billion euros in Valetta, he added that with land, natural resources and youthful labour to Africa’s advantage, there was a need to reset trade relations to allow Africa to compete with the west.

‘‘Removing subsidies to farmers of the advanced world, would create an even playing field for African farmers to compete. Removing revenue and non revenue barriers to African produce would give African agriculture a fighting chance.

‘‘We can achieve a lot in collaboration with the rest of the world and yet we must realize that a lot rests within our own capacity to achieve as Africans,’‘ he added.

The Ghanaian president who heads into crucial elections in December also spoke about the fledging democratic space in Africa despite the need for reforms and adjustments to the concept of democracy.

‘‘Democracy unleashes the creative juices of citizens. Africa has made remarkable progress. Elections are held regularly, civil society groups and think tanks have become more vocal, and the media is increasingly free.

‘‘And yet there is a lot more that can be done to allow Africans the space to express themselves. Democracy is not a one size fits all system. Different countries are at different stages of the democratic journey,’‘ he asserted.

He also tasked foreign governments to stop interfering in the internal politics of African countries citing how such interference has end up ravaging parts of north Africa.

‘‘Democracy evolves and cannot be forced. It doesn’t help for bigger powers to go proselytizing democracy. It can have its negative consequences as we are experiencing in parts of North Africa and the Middle East.’‘

After his presentation, he shared a video on his facebook wall, where he is seen receiving congratulations from UN staff who according to him, were impressed by the content of his presentation.