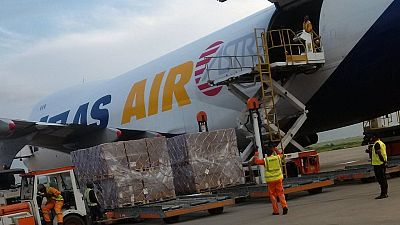 The Nigeria office of the United Nations Children’s Emergency Fund (UNICEF) has confirmed that $1.3m worth of lifesaving supplies had arrived in Nigeria.

The supplies are meant to be given to internally displaced people in the northeast, where Boko Haram insurgency has led to a humanitarian crisis.

UNICEF Nigeria wrote on their official facebook handle, ‘‘A Boeing 747 cargo plane arrived in Abuja on Sunday (September 11) with $1.3m worth of lifesaving supplies for internally displaced persons in northeast Nigeria.’‘

The plane brought in health kits containing essential medicines and health supplies for primary health centres in the states affected by the crisis.

The large quantity of supplies were of medical nature. ‘‘The plane brought in health kits containing essential medicines and health supplies for primary health centres in the states affected by the crisis,’‘ they added.

They further disclosed that the health kits will serve nearly one million people for a period of three months.

Other components of the relief supply include water, sanitation and hygiene (WASH) dignity kits, plus clean water storage cans, basic menstrual hygiene products enough for 80,000 women and adolescent girls over the period.

Humanitarian groups have continually called on the Nigerian government to turn its focus to the plights of persons displaced by the Boko Haram insurgency that has ravaged large parts of the northeast.

The worst affected states of Borno, Yobe and Adamawa have Internally Displaced Persons (IDP) camps where lots of people live. Some IDPs in Borno state recently returned in the wake of the Army’s retake of their local government areas.

The area for aid intervention was first assessed by aid workers in April after Nigeria’s army successfully pushed back Boko Haram militants.

One in every five of severely malnourished children risks loosing their lives, and the situation in Borno is deplorable because the kids do not have proper food and lack health care.

Farmlands in Borno have been devastated and abandoned due to repeated Boko Haram attacks.

The UN has called on other international donors to put hands on deck and seek a lasting solution in an effort to prevent a greater catastrophe.