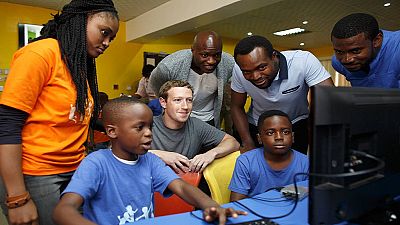 The Chief Executive Officer of Facebook, Mark Zuckerberg has been spotted in the streets of Lagos on Tuesday as he takes his first Africa trip to Nigeria.

His visit is meant to give the technology magnate an insight on how Africa is embracing the sector so that Facebook can better support tech development and entrepreneurship across Africa, Facebook said in a statement.

Mark Zuckerberg, the CEO of Facebook walking across the streets of Yaba, Lagos State, Nigeria. pic.twitter.com/1CT0fobfZx

“This is my first trip to sub-Saharan Africa. I’ll be meeting with developers and entrepreneurs, and learning about the startup ecosystem in Nigeria. The energy here is amazing and I’m excited to learn as much as I can,” Zuckerberg said.

He met with developers, trainees and other technology enthusiasts at the Co-Creation Hub (CcHub) in Yaba, Lagos where he interacted with kids and entrepreneurs to have an idea of how technology works in Africa.

“The first place I got to visit was the Co-creation Hub Nigeria (CcHUB) in Yaba. I got to talk to kids at a summer coding camp and entrepreneurs who come to CcHub to build and launch their apps. I’m looking forward to meeting more people in Nigeria,” he said.

The visit was extended to other tech developers including Temi Giwa, who built a platform called Life Bank that makes blood available when and where it is needed in Nigeria.

Zuckerberg also visited Andela which is funded by himself and his wife to building the next generation of technical leaders in Africa.

In the two years since it was founded, Andela has accepted just over 200 engineers from a pool of more than 40,000 applicants.

“We are excited and honored to welcome Mark Zuckerberg to Lagos. His visit reinforces not only his support of Andela’s mission, but his belief that indeed the next generation of great technology leaders will come out of Lagos, Nigeria and cities across Africa,” Director of Andela Lagos, Seni Sulyman said.

The visit ended at an Express WiFi stand in Lagos owned by Rosemary Njoku. “Facebook’s Express WiFi lets entrepreneurs like Rosemary set up a hot spot to help their community access apps and services built by local developers,” the social network service said.