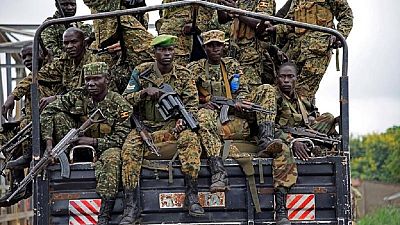 The Ugandan army is currently clearing its barracks across the country of shops and drinking bars. A move the army says is intended to ‘‘avoid items inside military installations that are not supposed to be there.’‘

The Daily Monitor portal however alludes the move to a curb in the rising incidence of shooting where many people have been killed by drunken soldiers.

It’s not related to the shootings. We are just streamlining how businesses are done inside the barracks based on our standard operating procedures that govern activities in the military barracks.

The portal reports that the ‘‘clear out’‘ was issued by Gen Katumba Wamala, the Chief of Defence Forces (CDF) of the Uganda People’s Defence Forces (UPDF) a fortnight ago but its implementation started last week.

Spokesperson of the Airforce, Maj Tabaro Kiconco, is quoted to have said that the directive was part of a streamlining of activities in the various barracks across the country.

Denial that directive is linked to shootings

“It’s not related to the shootings. We are just streamlining how businesses are done inside the barracks based on our standard operating procedures that govern activities in the military barracks,” he said.

Uganda has a history of drunk soldiers going on rampage in barracks. According to the Daily Monitor, the most recent event was last month; when a suspected drunken soldier shot and killed seven people inside a Military Police Barracks in the capital, Kampala.

The affected businesses are those owned by families of UPDF officers, most of who run these shops and bars as a source of additional income.