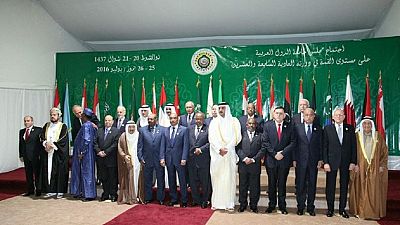 Libya has called on the Arab League to help stop the flood of weapons into the country which is helping fuel the Islamic State insurgency.

The Prime Minister of the Libyan government of national unity (GNA), Fayez al-Sarraj, in a speech on Monday at the 27th Arab league Summit in the Mauritanian capital Nouakchott, requested for support to end arms infiltration while rejecting foreign military intervention in the country.

Al-Sarraj retraced Libya’s fight against the Islamic State group which took advantage of the political chaos in the country in 2014 to set up its stronghold after the ousting of Muammar Gaddafi.

The African Union was represented at the summit by Chadian president and the current AU chairperson Idriss Deby Itno.

The summit which was supposed to be a two-day event, ended on the evening of its opening on Monday and was attended by seven heads of states out of the 22 heads of member countries.

Among those present were the presidents of Yemen, Sudan, Comoros and Djibouti including the host president Mohamed Ould Abdel Aziz who was appointed chairman of the organization for one year. Other member countries had representation at the summit except Syria.

“The Arabs have shown they are able to deal with common problems without differences and Nouakchott will be a new starting point for a joint Arab action,” the secretary general of the Arab League, Ahmed Aboul Gheit, said at a press conference at the close of the Summit.

He added that there was unanimity for finding political solutions to end the chaos in Syria, Yemen, Libya and Iraq easpecially while recalling the commitment of the leaders to unite against terrorism.

Mauritanian president Mohamed Ould Abdel Aziz described the Summit as a success despite its abrupt end contrary to what was planned.

Morocco was supposed to host the Summit in March but later withdrew from hosting it giving the reason that “it wanted to avoid giving a false impression of unity in the Arab world”.