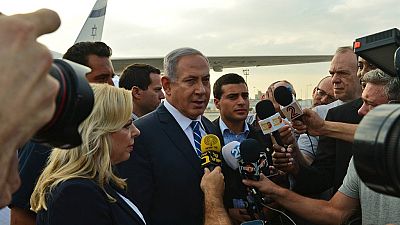 The Israeli Prime Minister, Benjamin Netanyahu, would on Monday arrive for a historic tour of East Africa starting in Uganda before heading to Kenya, Malawi and Ethiopia.

As part of the visit, the Israeli premier is expected to pay a memorial visit to the spot where his elder brother Yoni Netanyahu died on this day in 1976. He would subsequently partake in a regional security summit to be hosted at the Ugandan State House.

Mr Netanyahu will be the first sitting Israeli prime minister to visit Africa in over two decades.

I’m very open about it, that's true, why should there be such a dissonance between these strong bilateral ties and the multilateral ties? Why not correct this absurdity?

PM Netanyahu departs for historic visit to Africa in which he will attend a summit with leaders of 7 African nations pic.twitter.com/ESE39aU9B7

The anti-terrorism summit will pool together regional Heads of State from Rwanda, Tanzania, Kenya, South Sudan, Ethiopia, Zambia and Malawi.

Yoni Netanyahu, Benjamin’s brother died on 4th July 1976 as he commanded a rescue mission to free Israelis who were part of over 250 passengers taken hostage on an Air France flight from Israel to France.

Uganda’s Daily Monitor news portal reports that as part of his plans, the Israeli Prime Minister would actively seek to woo Africa ‘‘to end decades of hostility and convince African countries to stop voting against Israel at the United Nations.’‘

The Daily Monitor quotes Mr Netanyahu as saying, “I’m very open about it, that’s true, why should there be such a dissonance between these strong bilateral ties and the multilateral ties? Why not correct this absurdity?”

“Israel was blacklisted in Africa, basically kicked out by political pressure from many, many countries in which we were involved in the 60s and 70s and it took a while to change,” he added.