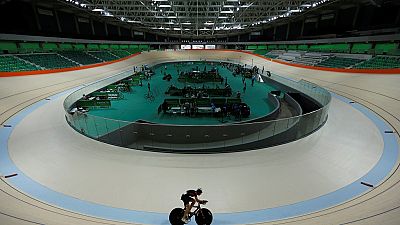 The troubled track of the Rio Olympics, the velodrome, is almost ready with just about six weeks to the opening of the games.

Mayor of Rio de Janeiro, Eduardo Paes handed the velodrome over to the President of the Brazilian Olympic Committee saying, “I believe this shows that our country is capable of doing things. All the stadiums were finished in the allotted time except for this one. But we promised the IOC that we would make this velodrome and we are turning it over now.”

Cyclists are already test riding on the track and seem pleased with the state of the velodrome.

Gael Suter is a member of Team Switzerland

“The venue is great. Not finished yet but it’s working well and it’s already in good condition to ride and I think some great times will be done at the Olympics.”

However, some work remains to be done on the facility, including stands.

Executive Director of the International Olympic Committee, Christophe Dubi said, “What you see here in the back for me reflects what you will see happen in these Games. We have all of the athletes here and in the end, this is what we’re all about. It’s about the athletes’‘.

Last month, Rio de Janeiro’s city authorities canceled the contract of the company constructing the velodrome after the firm filed for bankruptcy protection.

The construction of the venue was handed over to a Brazilian company that had been working on the project as a sub-contractor.