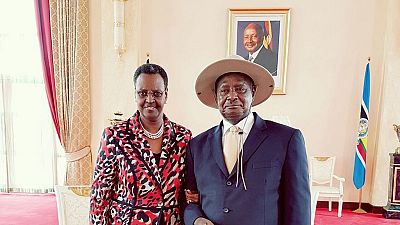 Janet Museveni, wife of Ugandan president Yoweri Museveni has been sworn in as the country’s new Education and Sports minister.

The first lady was sworn-in along with other ministers and the new cabinet at an event in the capital Kampala. The long serving leader won polls in February this year leading to the formation of his new team.

Janet is no stranger to politics, having held the position of minister of Karamoja affairs in 2009. She was accompanied by her three daughters to the swearing in ceremony.

Her twitter profile has also changed to reflect her new position, ‘‘Minister of Education and Sports. First Lady of the Republic of Uganda,’‘ it reads.

Recently, the 71-year-old president who has been in power for three decades promoted his son Kaneirugaba Muhoozi to the position of a major general, sparking claims of a succession plan.