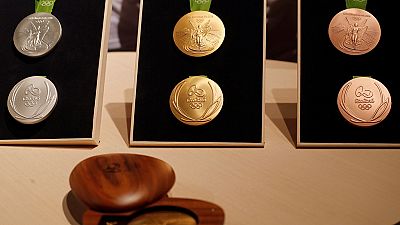 With just over 50 days to go for the Rio 2016 Olympics, organisers unveiled the medals that athletes from around the world will be competing for.

This year’s design for the gold, silver and bronze medals features “the traditional laurel wreath on the faces of the medals, representing the relationship between the strengths of Olympic heroes and the forces of nature.”

The unveiling ceremony held at the Barra Olympic Park comes as organisers are working on the final stages of the construction of different venues.

“Our experts and everybody tell me that the velodrome also will be ready for the Olympic Games and that at the end of this month you will see training sessions to test the track so it will be an effort and until the last minute like many things, but at the end I’m really absolutely confident that everything will come together,” said the International Olympic Committee President, Thomas Bach.

As the countdown continues, accommodation and transport are being upgraded to cope with the demands of mass tourism that will arise from the biggest sporting event in the country.

Despite a public health emergency, a governmental meltdown and economic woes, the World Health Organization (WHO) and the International Olympic Committee (IOC) insist the show beginning on the August 5 will go on.