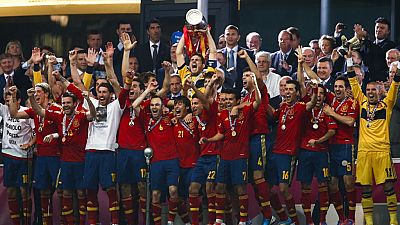 The continent’s top 24 teams would be slugging it out to determine who comes top after four weeks of football spanning some 51 games in total.

The holders Spain would do all it takes to retain the crown after a shambolic outing at the World Cup in Brazil, the World Champions, Germany; tournament host, France; Italy and Ronaldo-led Portugal are all seen as potential winners of the championship.

Football database website Transfermarkt
has ranked the participating nations measuring the value of the respective squads. This was calculated by adding the market values of every individual player in each squad.

The value of each player was worked out by taking into account their recent performances, consistency, and potential, as well their international experience and marketability.

So which nations qualified to be in to top 10 most valuable teams at Euro 2016?

These are the most valuable squads taking part in Euro 2016 https://t.co/H6c5JMoKqt pic.twitter.com/oIhFFBZZuv

Real Madrid forward Ronaldo is the most valuable player at the tournament accounting for a third of the total value of the Portuguese national team, whiles England manager Roy Hodgson is the most paid manager. The website also valued the entire tournament at over $5.6 billion