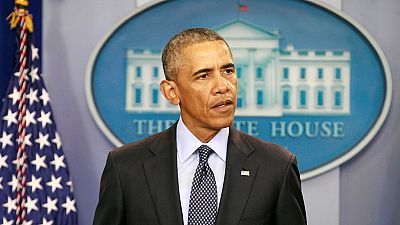 US president Barack Obama has described as an act of terror, the killing of at least 50 people at Pulse, a gay club in Orlando, Florida.

Addressing journalists at the White House on Sunday, President Obama said: “Today as Americans, we grieve for the brutal murder, a horrific massacre of dozens of innocent people.”

He indicated that although the investigations were still in the early stages, “we know enough to say that this was an act of terror and an act of hate and as Americans we are united in grief and outrage and in resolve to defend our people”.

“The FBI is appropriately investigating this as an act of terrorism and I’ve directed that we must spare no effort to determine what, if any, inspiration or association this killer may have had with terrorist groups. What is clear is that he was a person filled with hatred,” Obama added.

The gunman was identified as a 29-year-old Florida resident of Afghan descent, Omar Mateen. He was killed in a shootout with the police having taken some hostages.

Orlando police chief John Mina said a SWAT team rescued about 30 people and about 53 injured persons were taken to hospitals.

Mateen was said to be armed with an assault riffle, a shotgun and a device which is yet to be identified.

President Obama said that the attack has brought to the fore once again issues of gun control.

“The shooter was apparently armed with a handgun and a powerful assault rifle. This massacre is therefore a further reminder of how easy it is for someone to get their hands on a weapon that lets them shoot people in a school, or in a house of worship, or a movie theater, or in a nightclub. And we have to decide if that’s the kind of country we want to be. And to actively do nothing is a decision as well,” Obama said.

The Islamic State has claimed responsibility for the attack on the Pulse night club.

The Islamist group’s news agency Amaq claimed that Omar Mateen was one of its “fighters”.

Mateen was a subject of terrorism-related investigations by the Federal Bureau of Investigation (FBI) in 2013, but the cases were closed after interviews with him proved inconclusive, FBI officials said Sunday.

Ronald Hopper, an FBI official in Orlando, said investigators first became aware of Mateen in 2013 “when he made inflammatory remarks to coworkers alleging possible terrorist ties.”

Mateen reportedly called emergency services before the attack and swore allegiance to the Islamic State group, unnamed officials have told US media.

It’s not clear yet what links, if any, he had to the group.

President Obama, in his address said the attack was a “heartbreaking day” for the lesbian, gay, bisexual and transgender community.

“This is an especially heartbreaking day for all our friends, our fellow Americans, who are lesbian, gay, bisexual or transgender. The shooter targeted a nightclub where people came together to be with friends, to dance and to sing, and to live,” Obama said.

“The place where they were attacked is more than a nightclub, it is a place of solidarity and empowerment where people have come together to raise awareness, to speak their minds, and to advocate for their civil rights,” Obama added.

June is gay pride month in the United States, a period when LGBT activists celebrate their sexual identity and rights they have earned in recent years.

The attack, which left some 53 others injured is considered the worst in US history surpassing the 32 people killed in 2007 by a gun man at Virginia Tech University.

#TelAviv city hall lit up in #US & #LGBT flags in solidarity with #Orlando https://t.co/MBBwtC7OlP pic.twitter.com/obqqnrSGA1 #shooting

Meanwhile, police in California on Sunday arrested 20-year-old James Howell from Indiana in a residential area in Santa Monica who was said to be armed with guns and explosives attempting to attack the Los Angeles gay parade.