While the on-going industrial action across France threatens to blight the start of Euro 2016, there was a different atmosphere in one corner of the French capital, as football legend’s Diego Maradona and Pele went head to head to help usher in the tournament.

The two South American stars took to a five-a-side pitch in Paris on Thursday, to coach teams full of former footballing greats.


Today in #Paris with #DiegoMaradona . Football unites us all, in peace and friendship. #Euro2016 pic.twitter.com/Zm4lu0MrY1

The 55-year-old Argentine’s side included former French and Dutch players David Trezeguet and Clarence Seedorf while ex-England defender Rio Ferdinand was on hand for the 75-year-old Brazilian’s team.

And it was honours even though the match finished eight a piece. 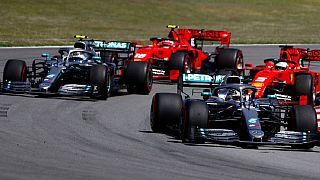