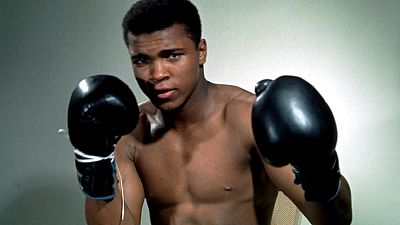 He shot to fame by winning the light-heavyweight gold medal at the 1960 Rome Olympic games.

After making his way through the heavyweight division with his unorthodox style, Cassius Clay, first became world champion in 1964 when at 22 he upset the odds beating defending champion Sonny Liston in Miami in 1964.

Known for his comical and rhyming trash-talk of his opponents, Clay was given another nickname – Louisville Lip.

Clay often said he could “float like a butterfly,(and) sting like a bee” – a saying he alludes to his quick-footed ‘Ali Shuffle’, his lightning-like fast deliveries and rope-a-dope techniques.

Several weeks before Clay’s fight with Liston, the Miami Herald published an article in which it quoted Cassius Clay Snr. as saying that his son had converted to Islam at the age of 18 adding that the young Cassius was “confused” and did not “even know where he’s at”.

But Clay would not comment on what his father was reported to have said but instead focused on his preparation for the fight.

He was threatened with a cancellation of the fight unless he publicly denounced the Nation of Islam which he refused.

A day after he beat Liston for the heavyweight title, Clay took many by surprise when he revealed that he was a member of the Nation of Islam.

He was eventually to adopt the name Muhammad Ali and openly supported controversial leader Elijah Muhammad.

The revelation was also the beginning of a roller coaster ride for Ali who, three years later and citing religious beliefs, refused to enlist in the US Army to fight in Vietnam.

In an interview he said, “The so-called Negros go ten thousand miles away from home here in America to drop bombs and bullets on other innocent brown people that never bothered us. And I will say directly: no I will not go”.

Ali, who has been named the “Sportsman of the Century” by Sports Illustrated magazine was a civil rights campaigner and poet.

After a three and half year ban, Ali returned to the ring in 1970.

A year later in what was billed as, “The Fight of the Century,” Ali went toe to toe with undefeated champ, Joe Frazier but lost.

He would gain revenge four years later though in the classic ‘Thriller in Manilla’.

Several fights followed his first defeat at the hands of Frazier but they were all dress rehearsals for the biggest match of Ali’s career – ‘The Rumble In the Jungle’ with heavy hitting George Foreman in 1974 in Zaire (now The Democratic republic of Congo).

Ali upset the odds once again and regained his world heavyweight title.

As much as he was a sporting legend, Ali was also a cultural icon, inspiring Sylvester Stallone to write the multiple Oscar-winning “Rocky”.

Three years later he was diagnosed with Parkinson’s disease, but despite his illness and progressing disability, he remained an active and influential public figure.

He died at a hospital in the US city of Phoenix, Arizona, after being admitted on Thursday suffering from a respiratory illness, a condition complicated by Parkinson’s disease.

Ali will go down as arguably the best boxer the world has seen but he was more than that, much more.

He truly deserved his self-proclaimed title – The Greatest.