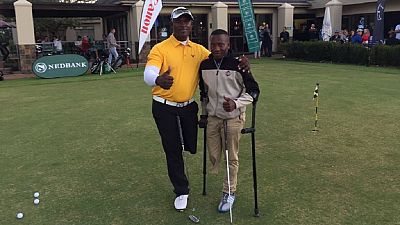 South African teen golfer, Simu Mdudu lost his right leg in 2013 after a train accident while on his way home from school.

The 18-year old took up golf after a friend introduced him to the South African Disabled Golf Association (SADGA) and he took a keen interest in the sport.

“I was on a train and it was full so somebody pushed me by accident so I fell to the other side of the train, the left side and the right side it was open, the doors were open,” he said.

Apart from playing on the course Simu also watches videos of other disabled golfers often which he says has helped improve his game.

Playing golf as an amputee has not been easy. Simu has had to put in long hours of practice to perfect his golf swings and remain steady at the same time.

“It’s very difficult to play with one leg because I have to balance and aim and I have to target the ball to hit it where I want it — the direction I want it to go to,” said Simu.

The young golfer is already making great leaps. He recently played his first major tournament in the 18th Nedbank SA Disabled Golf Open in Pretoria, where he also met other golfers who inspire him like renown disabled golfer, Manuel de los Santos from the Dominican Republic.

“Simu was very very nervous, it was his first tournament his first time in an aeroplane, we think he did exceptionally well, he has produced better scores here in Cape Town, but in the tournament under tournament conditions with all the cameras on him he still did incredibly well,“Lily Reich, secretary of SADGA said .

Simu attends Ned Doman High School, where he has become rather popular because of his golf achievements.

“I hope he can carry the flag of South Africa and he’s capable of that, I want to see him playing professionally if god allows him to, I also see him as an independent guy, so that also brings joy to our family,” Sipho Mcoyane said.

An inspiration to other South African disabled teens, Simu is working his way towards playing in more tournaments.