Housing in Congo's Pointe-Noire: A case of financial muscle over availability (2) 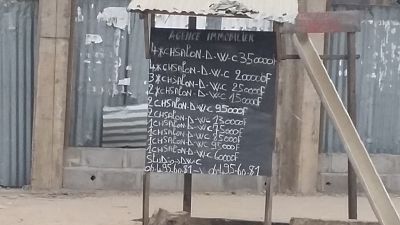 In the first part of this piece, we looked at how easy it was to get an apartment to rent in Congo Pointe Noire, in this concluding part we talk cost implications and rental dynamics from Congo’s commercial hub.

An average air-conditioned one bedroom with hall, kitchen, toilet and bathroom plus fitted water heater costs maximum 150,000 CFA ($260) per month.

Back home, you could buy power (prepaid credits) weekly, tariffs are over the roof in the wake of power crisis known as "dumsor" for that Congo is ahead of us by miles.

The amount is rather on the high side for most locals who mostly live in structures that are not up to those that expatriates easily rent here.

The poverty statistics is estimated at 74.8% in rural areas, compared with 32.3% in urban areas, according to the 2011 Congolese household survey (Enquête Congolaise auprès desménages, ECOM).

Fatimata is all smiles when the time is up to pay for the rent. This is because she shares a two bedroom apartment with a colleague, so  they have to split the 250,000 CFA ($ 435) cost. But she is not exactly happy that she has to share especially a common washroom, sitting area and kitchen with her co-tenant.

Depending on where the house is, a client could use water for free as Emmanuel attests, “We have a tank in our home, it’s filled every weekend and it’s free,” he says with a smile.

The power situation is slightly different  though but also relatively cheaper because bills are brought after every a month and half sometimes in two months here in Congo and they are very affordable compared to the situation in Ghana.

“Back home, you could buy power (prepaid credits) weekly, tariffs are over the roof in the wake of power crisis known as “dumsor” for that Congo is ahead of us by miles,“  Emmanuel further attested.

Housing in #Congo's #PointeNoire: A case of financial muscle over availability (1)https://t.co/1CAQ43Q4An

Subsequently, a person is expected to pay his monthly rent at the beginning of the month for as long as he occupies the apartment, increases could be discussed but they are rare.

Caution is an investment deposit of sort that the client is entitled to reclaim when quitting the apartment. The condition being that there are no damages during their stay. That money goes into repairs with the remainder paid back.

The Ghanaian system as Emmanuel explains is one where the client and landlord agree on a month’s fee but the problem is, the client must pay at least a 24-month equivalent of the agreed sum at a go.

With that, the tenant stays till the expiry of the duration then has to cough up same to renew the tenancy. More often than not, landlords revise upwards their fees after each expiration. But as is the case in Congo, tenants take care of their utility bills.

Abraham Maslow in his famous ‘Hierarchy of Needs’ placed shelter in level two (Safety Needs), second to biological and physiological needs. A testament that a roof over one’s head is important and dignifying, more so in the case of corporate executives like Fatimata and  Emmanuel who have the financial muscle to pay and live comfortably.