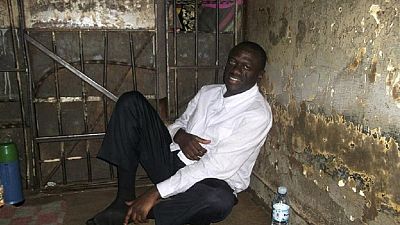 Besigye was on Wednesday morning expected to appear before the court for much anticipated hearing but his party, the Forum for Democratic Change said, their leader was not in court.

Court over. This is ridiculous!! Many have refused to leave court till kizzabesigye1 is brought. Closed door to court. #WeAreAllPrisoners

The prosecutor had earlier requested that due to a ‘security threat’ situation, they wanted Besigye’s case to be heard closer to Luzira prison where he is being held.

Our lawyers have learnt that Mr. Chibita, DPP did not plan to bring KB to court. He wants to take the court to Prison! #WeAreAllPrisoners

Wednesday’s date was set by presiding Chief Magistrate James Ereemye on May 18 when Besigye made his maiden court appearance.

The prosecution, led by Doreen Elima had said they needed more time to carry out investigations regarding Besigye’s case file before asking for an adjournment to enable them carry on with the said investigations.

Besigye was charged with treason after he swore himself in as president of Uganda.

He was arrested in the capital Kampala after staging a swearing-in ceremony and then taken to Moroto, a town about 400km away.

During his maiden appearance at the Nakawa Court, the four-time presidential candidate was not allowed to make a plea on the grounds that the charges against him were capital in nature and could only be tried by the High Court.

The Forum for Democratic Change leader could not ask for bail since the same court does not have jurisdiction to entertain his bail application.

He was returned to the Luzira prison amid tight security.

Prosecution alleges that he and others at large between February 20 and May 11 in diverse places in Uganda, formed an intention to compel by force, the government of Uganda to change its measures and methods of acceding to the office of president of the country.

He had disputed veteran president Yoweri Museveni’s victory in the February presidential election.

Treason is a capital offence in Uganda but the death penalty has not been carried out for years. Besigye was previously charged with treason in 2005 but that case was later dropped.