Cameroonians get their own video game - Aurion 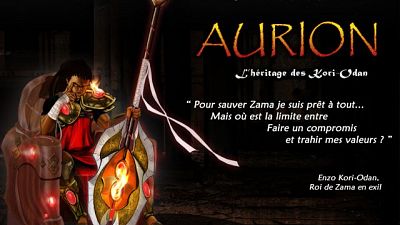 The video game industry in Africa appears to be picking up pace – and real fast too.

Game developers across the continent, just like their colleagues who create comic work, are stepping up to the task of weaning Africans off foreign games they have been used to for several years.

A Cameroonian games developing company Kiro’o Games has won over the hearts of video game enthusiasts with its game, Aurion: Legacy of the Kori-Odan.

Everything in the game; the music, sound effects, designs, codes, were all made in Cameroon.

Aurion focuses on the story of Enzo Kori-Odan, prince of Zama, a fictional state.

Enzo suffers a coup d’etat from his brother-in-law on the day of his coronation and marriage to Erine Evou. The exiled royal couple decides to go round the world in search of support. They would specifically have to reunite Enzo’s warring legacy in order to retrieve their throne.

And that is where the players come in handy – to help the prince overcome the obstacles in his way.

Olivier Madiba who developed the game explained that the game was completely developed in Cameroon.

“Everything in the game; the music, sound effects, designs, codes, were all made in Cameroon” he said.

He describes his work as the “first RPG type game that shows the African fantasy. So we invented a form much like science fiction, but this time, it’s more of the African tradition, a much evolved form”.

Olivier and his team at Kiro’o Games operate from a small studio in heart of the Cameroonian capital, Yaounde.

25 designers and programmers worked on the Aurion project – a game he is confident Africans will identify with.

“Africans will clearly identify with this game because even though our (game) world is not the planet Earth, we fully welcome the other world. The game is built to specifically reflect the challenges Africa faces today,” he said.

The official release of Aurion on April 14, 2016 was hailed by Cameroonians who have embraced the game developed by one of their own.

Rostand Ekassi who is president of the Association of Gamer’s in Yaoundé
said “it’s rare to come across a game” like Aurion that “you can easily identify with”.

For him, the costuming of the characters in the game and their habits speaks volumes about the fact that the game was tailor-made for Africans. “When you play it, you really feel that yes, this is your thing” he added.

The production of this game was based on an appeal for contribution launched by gamers, an appeal which yielded some 183,000 euros.

With the game now officially available to the public, Olivier Madiba and his team will have to deal with the phenomenon of piracy, which undermines the video game industry in Africa.