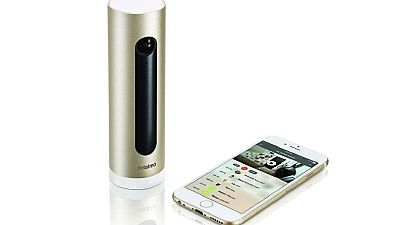 Netatmo Welcome is one of a growing number of smart home security cameras competing for its share of the market.

Owners can build up to 16 individual profiles. Only people recognised by the device can enter the home, and users are informed in real time of a human presence inside the house thanks to a dedicated smartphone app.

Current security cameras are not that smart. So they can tell you if something is moving but they don’t necessarily know if it’s a human being or if it’s your kids.

The company says the device is far more efficient than systems based on movement sensors.

“Current security cameras are not that smart. So they can tell you if something is moving but they don’t necessarily know if it’s a human being or if it’s your kids, they don’t know the difference. So they will alert you all the time, also if lighting conditions change, and it can be very annoying. But, if you’re a very busy working professional, you want to know what’s going on at your place and therefore we developed face recognition technology so you would know if your kids are back home or if there’s an intruder at your place, for example,” Janina Mattausch, Product Marketing Manager at Netatmo said.

The camera relies on a home’s wi-fi network to communicate. It is equipped with infrared LEDs for night vision and has a field of view of 130 degrees. But detractors say it lacks many common home-security camera features including sound detection and two-way audio.

And while its makers say the system only requires a couple of glimpses of a person’s face to build a full picture, critics say its facial recognition technology is “far from reliable” and results in exactly the kind of vague alerts it promises to eliminate.

“There is a face recognition algorithm, a deep-learning algorithm in the camera. Basically what it does is make a mathematical representation of the face. So we’ll calculate all the distances and all the characteristics on your face and thereby build a representation of your face in terms of numbers and algorithm,” Janina Mattausch, Product Marketing Manager at Netatmo said.

The company claims its face-recognition camera has already helped at least one user catch a thief. Damien decided to test the smart security camera after noticing money kept disappearing from the living room drawer in his Paris apartment.

He was able to give the police images of the burglar, who was arrested and sentenced to nine months in prison.

“I was at work when my phone vibrated,” explains Damien. “At first I thought, It must be a false alert, I need to make some adjustments. But the notification on my phone was not only telling me there was movement in my flat but also that there was a face that the app wasn’t familiar with, and this person was wandering around my flat, and I could see this live in video mode,” he said.

The face recognition security camera is not only targeted at home owners worried about security. A key market is also busy parents trying to balance work and childcare. The device allows you to set a curfew time for notification, for example when your kids are meant to arrive home from school.

According to Janina Mattausch: “If there was an intruder in my house, then I would be alerted with the camera, so I don’t have to spend time worrying about what’s happening at home or worrying, Where are my kids? Are they already home? Because I know I will be alerted by the camera,” she added.

All video is recorded locally in a data card that slots into the back of the camera – there is no external storage backup. While this eliminates the cost of monthly storage fees, it also means that if your camera is stolen, so are the recordings it contains, depriving you of any forensic evidence. 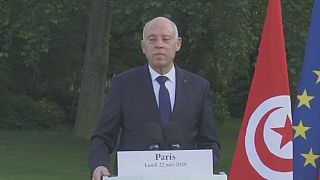