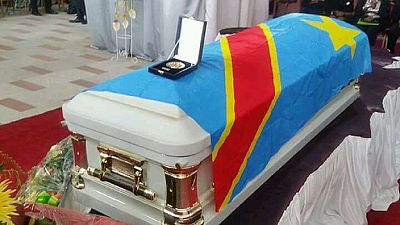 Africa mourned its revered musician, the King of Rumba, Papa Wemba who died on Sunday, April 24, 2016 in Abidjan during a concert.

Who is Papa Wemba?

The continent was in shock and accorded the fashionista and African rock music aficionado the highest respect from Ivory Coast to his home nation, the Democratic Republic of Congo.

A special memorial ceremony was held for the 66-year-old artist in Abidjan, three days after his death. In attendance were his wife, close family and friends, musicians, politicians and the general public.

Just as he will like it, a concert dubbed ‘Artistic Vigil’ was held for him before his body was flewn to the DRC.

Papa Wemba’s body arrived in Kinshasa accompanied by the Ivorian culture minister and musicians who handed the remains to the DRC Prime Minister Augustin Matata Ponyo, family members and the thousands of Congolese who lined up the streets in honour of their son and father.

Congolese president conferred posthumously the highest national honour of the country on Papa Wemba on Monday after he took part in the two-day tribute service for the musician at the seat of parliament where people from all walks of life attended to lay wreaths and pay their last respects.

According to information from the Congolese Ministry of Arts and Culture, guests were expected to arrive at 9am (0800 GMT) and the funeral ceremony started at 10am (0900 GMT) chaired by the Governor of Kinshasa, head of the organising committee.

The funeral ended after 11:30am (10:30GMT) and the body was transported to the Necropole Entre Terre et Ciel cemetery for burial a little after 12pm (11:00 GMT).