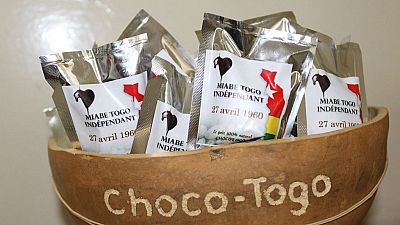 Togo’s agriculture export, until recently, was the leading foreign exchange earner for the West African country.

60% of its 7.5 million population is employed under the agriculture sector which has cocoa as its second largest export after coffee.

Despite its flourishing cocoa production, Togo did not process cocoa nor produce its own chocolate until 2013 when a team of six young Togolese entrepreneurs started a small cocoa processing company in Kpalime, a town 120km north of the capital, Lome.

We started the project with our own resources. We take the cocoa beans from the farmers on fair-trade basis, we process it into chocolate and then share the benefits equally.

ChocoTogo, as they call the cooperative, was born after they were selected, through an European Union young entrepreneurship programme, to receive traditional chocolate production training in Sicily and Mondica in Italy in 2013.

After several international trade fairs and insight into fair-trade chocolate production, processing and marketing, they started the first and only cocoa processing company in the country producing 100% organic chocolate made in Togo with no chemicals added.

From their first presentation of the chocolate products to the Togolese parliament in March 2014, ChocoTogo has grown to the international market by its participation in several trade fairs in Africa and Europe winning several awards.

“Our Chocolate has attracted a lot of interest on the local and international market. In 2015 we won an innovation award at Terra Madre, Italy, where we competed with Italian local chocolate brands. Later that year in November, we also won the startup of the year award in Togo,” Emmanuel Agbenonwossi, co-founder of ChocoTogo, told Africanews’ Ismail Akwei in an interview.

104 farmers benefit from the company that operates on a fair-trade basis. It has also employed 12 full-time workers and about 35 part-time workers mostly women and Togolese youth.

“We started the project with our own resources. As a social enterprise, we take the cocoa beans from the farmers on fair-trade basis, we process it into chocolate and then share the benefits equally,” Agbenonwossi explained.

The Togolese government acknowledged ChocoTogo during their 56th independence celebration on April 27 by presenting guests with the locally made chocolate products.

“Though we don’t have any official support or funding since we started in 2013, we believe the action of the government will boost our activities and encourage other young people to take up entrepreneurship,” Eric Komi Agbokou, co-founder and coordinator of the cooperative said.

Emmanuel Agbenonwossi believes that with adequate investment and a larger production unit, ChocoTogo can compete with big cocoa producing companies in the world.