Ghanaian film 'Children of the Mountain' gets global buzz 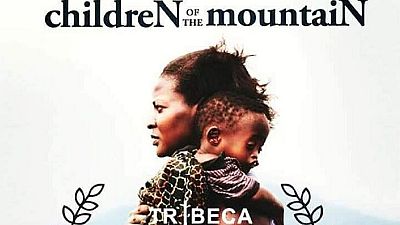 When Ghanaian filmmaker Priscilla Anany started working on her feature, ‘Children of the Mountain’, she probably did not anticipate the global buzz it has garnered.

“I made a movie and I wanted to show it to the world and I needed a good platform that would really push it,” she told Africanews’ Nii Akrofi Smart-Abbey.

But after 5 years of writing, re-writing and trying to raise funds for the film, Priscilla can now look back with pride at her work .

I want to be true to my culture and part of culture is the language so why should I be telling my story in English when the story is about the local people and I want people to be able to connect. Yes it is an international film but it is a Ghanaian film.

She won the Best Narrative Director award at the just ended Tribeca film festival in New York – a festival which accepted her submission although the film was not a hundred percent complete.

“By the time I was done, Tribeca was the one that was coming up so I applied for the Tribeca film festival … and fortunately ‘Children of the Mountain’ was selected,” she said with a smile which revealed her excitement about her new feat.

“We still needed to do a little finishing touches (to the film)” she said, explaining that she had to apply for an extension “to put finesse to everything. We were able to get it done so we went to the festival and I had no idea I was going to win an award and I did”.

Described as an “honest exploration of a mother’s will in the face of much adversity,” Children of the Mountain is a story about a woman’s lonely journey to try to find a cure for her child born with cleft and other medical conditions.

Essuman (played by Rukiyat Masud) is led to believe that she has a ‘dirty womb’ when her baby is born with a cleft lip, cerebral palsy and down syndrome. She is then disowned by her lover (played by Adjetey Anang) and is looked upon with suspicion by the community.

Her quest to get help for her son takes her to various places including the hospitals, medicine men and even pastors. One of the pastors wanted to take advantage of her vulnerability to have sex with her. Such self-styled pastors Priscilla felt needed to be exposed.

“In Ghana, church is a big business and a lot of pastors are driving huge expensive cars and living off of the collection of the vulnerable people who come to drop in their little collection. I sort of wanted to touch on that” Priscilla said of one of the themes of her film.

She explained that while casting for the little boy (which was eventually played by a girl, Jessica), she realized the dearth of knowledge among rural dwellers about cleft, a situation which leads many to condemn such children as evil.

The film, for Priscilla is an educational piece she intends to use to educate the public about birth defects as well as empower women to know that they are not always at fault when their babies end up with deformities at birth.

ChildreN of the mountaiN. So blown away by this film. A story that needs to be toldhttps://t.co/Ht4eBtn2xl https://t.co/hdqXlfFHtK

The film was shot entirely on location in Ghana’s capital Accra and a village in the Volta region, especially around the Volta lake. It was shot in Twi, a widely spoken dialect in Ghana and Ewe, the mother tongue of the Director as well as the language of the people of the Volta region where parts of the movie were shot.

But Priscilla says shooting the film in the local dialects was part of her plans to reach out to the people who need the information most whiles staying true to her culture.

“I think as a filmmaker, I want to be true to my culture and part of culture is the language so why should I be telling my story in English when the story is about the local people and I want people to be able to connect. Yes it is an international film but it is a Ghanaian film.”

But that was not the only reason, as she later confessed.

The star of the film, Jessica, who was born with a cleft lip, was supported by the Graft Foundation in Ghana to undergo surgery after the film and Priscilla intends to extend this help to other children by teaming up with US-based Smile Train Foundation to educate the public to end stigma against cleft sufferers.

The film is expected to be released later in the year. But before then, it has a few stops to make at upcoming international film festivals.