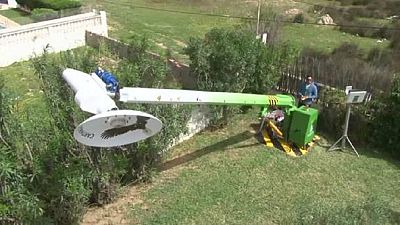 Tunisian innovators have looked to the past for inspiration from sails on ships to come up with designs for new bladeless turbines.

A start-up known as Saphon Energy has developed a new turbine design which is quieter, safer and more efficient than traditional wind turbines and is capable of capturing twice as much wind energy.

37-year-old engineer Anis Aouini leads the Tunis-based firm. He says that they looked to the old technology used by sailors of the ancient civilisation of Carthage, as well as the movements of birds and fish to inspire their design.

The Saphonian – as it is called, will be able to convert wind to energy at around 80 percent. Its lower cost could make it an attractive source of off-grid energy in developing countries.

The tech company hopes to put this into practice with a partnership in India.

“This project that is planned for India consisting of 50 Saphonians producing 20 kilowatts of power, a total of one mega watt, will be a wind farm. This power produced in south India, could meet the demands of a small village of 1000 houses even if the energy will be directly injected to the general Indian electricity network. But it’s an approximation to ease the understanding for viewers: it’s about 1000 houses in India,” Aouini told Reuters during a demonstration of the Saphonian in the Tunis suburb of Rouad.

The machine’s name,Saphonian, comes from a wind divinity that was worshipped by ancient Carthaginians.

The firm was recently awarded the 2015 Gulfstream Navigator Award, a prize given to industries that make a positive impact on health, economies or the environment while respecting global cultures.