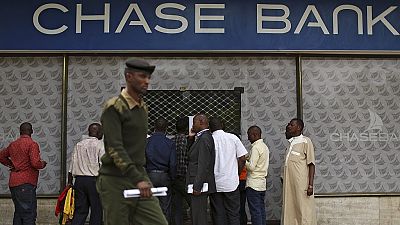 Kenya’s mid-sized lender Chase Bank reopened its doors on Wednesday three weeks after it was placed under receivership by the Central Bank of Kenya (CBK) following a run on deposits.

The re-opening of the bank is a great relief to Kenya’s small and mid-sized entrepreneurs who patronised the lender dubbed a “relationship bank.”

Chase Bank will now be under the management of the Kenya Commercial Bank (KCB).

We recognize the fact that our customers have been regrettably inconvenienced over the last two weeks.

“We recognize the fact that our customers have been regrettably inconvenienced over the last two weeks,” Paul Russo, the receiver manager appointed by KCB said in a statement.

“We thank them for their support and remain deeply committed to our customer service promise. Chase Bank’s unparalleled support to the small and medium sectors will continue unabated.”

Reports said the bank’s automated teller machines, its Internet and mobile banking platforms were all operational as usual but services such as registration of new customers, international and domestic transfers were unavailable.

Customers who visited the branches or transacted via internet or mobile banking could only access a maximum of Kshs 1 million from their accounts, the ceiling amount set by the CBK last week.

Central Bank of Kenya Governor Patrick Njoroge had earlier told a news conference he had received nine indications of interest in the mid-sized lender that was put into receivership this month before KCB group was appointed to manage the bank.

Chase Bank became the third bank the Central Bank of Kenya had taken over since Patrick Njoroge became governor last July. Dubai Bank of Kenya was liquidated in August and Imperial Bank was put into receivership in October.

Chase Bank chairman and managing director “stepped aside” after it reported a Kshs 686m ($6.8m) loss in 2015 compared to a Kshs 2.4 billion profit the previous year.

It also restated its results that showed loans to employees and directors totalled Kshs 13.6bn, up from Kshs 3.2bn it had reported earlier.

Kenya has 42 banks and Njoroge has said he would welcome consolidation in the sector but would not impose it.