Conservation of corals in Seychelles 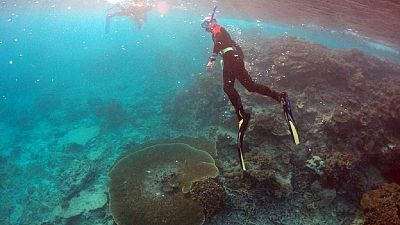 Rodney Quatre is a researcher for the Seychelles parks authority. He is a marine ecosystem specialist overseeing 9 protected areas.

He agreed to take Antoine Galindo, Africanews correspondent in Ethiopia and his crew on a familiarization tour around Mahe on the main Seychelles island.

The scientist wanted to observe the condition of the corals in the park at Baie Ternay.

We must decide if we want to continue to fish less fish, with more boats, or is it that allows some stocks to regenerate, through protected areas.

“Here we have acropoa corals, which have recovered from the last bleach. But there are also signs of a new bleaching and corals already dead,” he said.

The El Nino phenomenon could cause more damage this year.

Warmer waters bring back memories of 1998, the year the country lost more than 90% of its corals.

He dives to get a specimen which is in poor condition.

“This is a acropoa coral specimen. This part, it can be considered as dead. You can see that algae growing on it. This part is bleached. But this part is still alive, and still has a chance to regenerate,” he added.

Without the coral, Seychelles will have no viable marine ecosystem.

“You have to watch it like a forest. You have plants, animals that form ecosystems. Coral riffs, it’s the same thing. They are animals, and they act as a habitat for small fish. And they provide food to some extent. So I think having more protected areas would increase the strength of the ocean and we would allow for a more sustainable use for future generations,” said Rodney.

There’s a raging debate now. How can the protected areas be preserved without affecting tourism and fishing, two of the country’s main stays?

In late 2015, a marine area backup plan was finalized by the government of Seychelles. It is a 5-year plan to place 30 percent of the country’s 1.4 million squared kilometer of territorial water under protection.

Today only 1% of this area has been saved.

“Fishermen are aware that some stocks are under pressure. And we must decide if we want to continue to fish less fish, with more boats, or is it that allows some stocks to regenerate, through protected areas,” said Didier Dogley the Minister of Environment.

All year round, French and Spanish tuna vessels come to fish in Seychelles waters, a move that will make a renegotiation of the fishing agreements difficult.

Semi-industrial and traditional fishermen are however worried about their survival.

Philippe is a local boat owner. One of his boats, the Lion, just returned after 15 days at sea.

With the creation of new protected areas which are off limits, there are fears illegal fishing will become a common practice.

Keith is president of the association of traditional fishermen.

He agreed to take the crew to the other side of Victoria Bay where two boats from Madagascar were recently arrested and are being held at the waterfront.

“They are the two boats you see there. Look at this. Imagine 30 people on this? They will probably be sent home, and the boat will be confiscated, but what can you do with it? “ he asked.

Keith ensures that up to 20 illegal ships are arrested in a year. That is apart from those that manage to escape.

Seychelles hosts nearly 250 000 visitors annually. With the deterioration of its seabed, it would lose income from fishing and tourism and the whole economy would collapse.