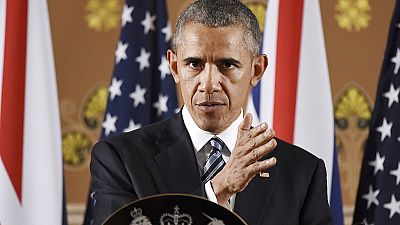 Barack Obama has dismissed suggestions that the international community would deploy troops to Libya to strengthen the new unity government and fight the Islamic State group.

“There’s no plan for ground troops in Libya,” the President of the United States said in London during a joint press conference with British Prime Minister David Cameron.

“I don’t think that’s necessary. I don’t think it would be welcomed by this new government. It would send the wrong signal,” he said

I don't think that's necessary. I don't think it would be welcomed by this new government. It would send the wrong signal.

He disclosed that the US was working with interested parties to ensure that ISIL are shut out of the north African country, “we are working not just with the Libyan government but a lot of our international partners to make sure that we’re getting the intelligence we need, and in some cases actions to prevent ISIL having another stronghold from which to launch attacks against Europe or the United States,” he said.

The European Union on Monday offered to support the new unity government in Libya in areas of economy and security and also training coastguard to help stem the migrants journeys across the Mediterranean.

Libya was plunged into chaos following the forced ouster of long time ruler Muammar al Gaddafi, Obama recently described as ‘‘the worst mistake of his presidency’‘ the fact that there was no plan after the overthrow of Gaddafi.

Libya now has rival governments ruling differnt parts of the country, even though the UN backed government in Tripoli led by Fayez al Sarraj has been gaining international trust and support over the last few months.

Islamic militants have also taken parts of Sirte and have been launching deadly attacks in other parts of the country, they were only recently driven out of Benghazi where residents are returning home after fleeing in the wake of the ISIL insurgency.