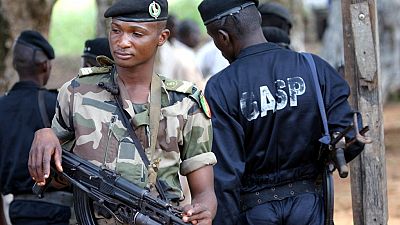 Helicopter attacks against former militia fighters in the southern part of the Republic of Congo have destroyed civilian infrastructure and caused many residents to flee, a Catholic bishop has said.

Louis Portella Mbuyu, the Bishop of Kinkala told Radio France International in an interview that the bombardment in the Pool region had gone on for about 10 days but it was unclear if anyone had been killed.

“The bombings have provoked alarm as well as forced displacement of the population,” he said adding that “this Wednesday, there were some bombings not far from Kinkala, in the village of Soumouna.”

Witnesses said a primary school was struck last week but no one was hurt because the strike happened early in the morning.

The Congolese government said it is attacking military bases linked to Frederic Bintsamou, better known as Pastor Ntumi, who led a militia that fought President Denis Sassou Nguesso during and after the civil war in 1997.

The authorities blame Pastor Ntumi and former militiamen for raids on military, police and local government offices in the capital Brazzaville on April 5.

The accusations he noted included mass arrests, torture and killings.

Al-Hussein said reports from the Pool region were difficult to verify because of lack of access to the area, which lies around 70 kilometres southwest of Brazzaville.

Executive Director of the Congolese Observatory of Human Rights, Tresor Nzila, said he could not reach the targeted areas when he visited the Pool last week but questioned the need to bomb a militia that officially disarmed over a decade ago.

“It’s bizarre because there was a disarmament, demobilisation and reinsertion,” he told Reuters. “The army is present in the Pool. The gendarmerie and police are there as well.”