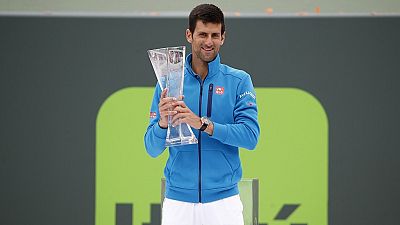 The 28-year-old Serbian captured his fifth trophy in six seasons on the Florida hardcourts to equal Andre Agassi’s Miami record total and took a record 28th career ATP Masters title, one better than the old mark he shared with Rafael Nadal.

“I have a very special connection to this tournament,” Djokovic said. “Back in 2007 at Miami it was the biggest tournament that I had won. It has been a springboard for everything that has come after that.”

Djokovic, who in January won at Doha and captured an 11th career Grand Slam title at the Australian Open, also swept the US double of Miami and Indian Wells for the third year in a row and fourth time overall.