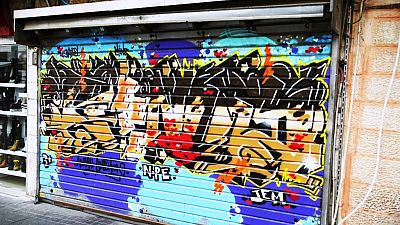 Near-daily unrest is scaring clientele away from Jerusalem’s normally bustling main market, Mahana Yehuda, causing a steep decline in sales at its bars, shops and restaurants.

However, as the market shuts down at night, new faces appear.

A graffiti artist and his partner are painting dazzling portraits, turning the market, or “shuk” in Hebrew, and its drab alleyways, into a portrait gallery.   The project began a year ago as a way to tell the stories of these faces, but it’s also managed to improve the mood of the shuk.

Berel Hahn, the project’s co-founder said, “in the beginning when we just started, it was just colour and we saw it was having a very strong effect on people, it was putting smiles, people were in shock and loving it. Then there were requests for portraits and it led to a handful of characters and then people would stop and look and ask: ‘Who is this?’ and we’d tell them the story and they’re touched, they’re moved on a whole other level.”

The overall theme is to inspire people to do what people who made the world a better place or changed the world did.

“The overall theme is to inspire people to do what people who made the world a better place or changed the world did, whether a big or small impact they’re heroes and heroines, heroines and heroes from all walks of life, it’s not just Jews and that is one of the universal aspects of our culture, which is trying to better ourselves and overcome our own evil inclinations to be a better person and make our surroundings better,” Hahn said.

The artists take suggestions from shop owners and passersby and draw inspiration from their surroundings in this Biblical city.

“The situation in the market is very difficult. If the status in Jerusalem remains unchanged, we will have a very hard time to overcome it, but I think this graffiti creates a buzz and can definitely help to bring people to the city, so that’s good,” Yoav Mizrahi, a cafe manager said.

With already 360 shutters in the market painted, the artists hope to find a way to have their work on display during the day, to draw visitors when stalls are open.

“Art can have a neurological effect on a person, endorphins, oxytocins that make them feel good and people, now that it’s gotten out there and people have been picking up the story, more and more people are coming to visit the shuk because of the art,” Hahn explained.

The artists are aware that while the project might not restore the market to its pre-violence state, art can only do good for the people of this beleaguered city.