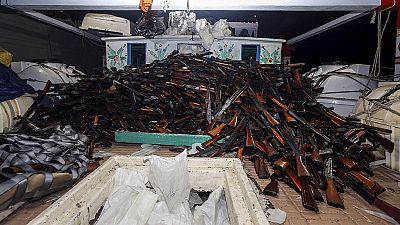 French naval forces have seized a large weapons cache from a small ship said to be heading towards Somalia.

The cache according to the BBC included assault rifles, machine guns and anti-tank weapons.

The weapons smugglers were spotted heading toward Somalia by the French warship’s (FS Provence) Caïman helicopter whilst it was undertaking routine surveillance in the Northern Indian Ocean.

According to navaltoday.com, a team from Provence boarded the small vessel and determined that it was not registered in any country. The team then searched it and discovered the weapons.

The weapons were seized based on a UN Security Council arms embargo preventing arms from getting to the Islamist militants operating in Somalia.

The Commanding Officer of Provence is quoted as saying: “This success remains a collective one, showing the value of like-minded nations committing ships and aircraft for the common good.”

The seizure is considered a major step towards stabilizing the horn of Africa region which has been terrorized by the al-Qaeda affiliated Islamist group, al-Shabab.

The seizure comes barely a month after an Australian naval ship intercepted a cache of arms on a fishing boat off Oman, also believed to be on its way to Somalia. There were 1989 AK-47 rifles and 100 rocket-propelled grenades.

The FS Provence is part of a multinational Combined Maritime Forces (CMF) that patrols the Indian Ocean.