Hijacker of the EgyptAir plane that was diverted to Cyprus has been arrested.

13:05
Plane hijacking suspect to be question ‘to ascertain his true motives’.

“At some moments he asked to meet with a representative of the European Union and at other points he asked to go to another airport but there was nothing specific,” Egyptian Prime Minister Sherif Ismail said.

13:02
Crew and passengers freed and safe.

All passengers and crew are safe

The hijacker has just been arrested. 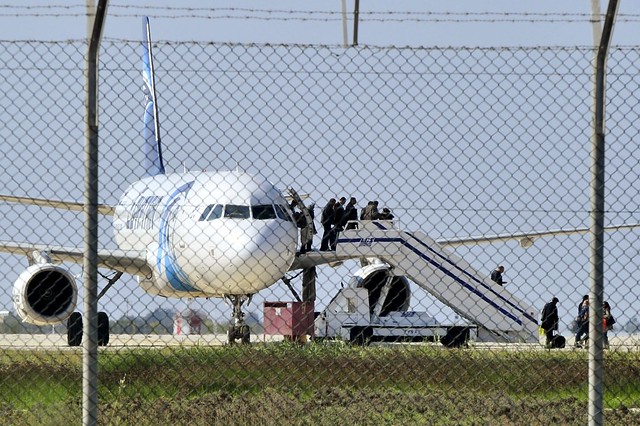 12:00
At least 4 more people seen leaving EgyptAir hijacked plane- AFP
Many passengers have been freed but negotiations to release more are still ongoing.

The #hijacker of #MS181 is Seif Eldin Mustafa. The situation is still ongoing.

11:33
Egyptian Civil Aviation Minister declines to give the identity of the hijacker and passengers left on board the aircraft.

Terrorism ruled out
“It is not something which has to do with terrorism,” Cypriot President Nicos Anastasiades told reporters.

9:45
4 -5 more passengers seen leaving the hijacked EgyptAir plane. It is not yet clear how many people are left on board the aircraft. Reuters

Egypt TV posted picture of hijacker Ibrahim Samaha before he went aboard the flight pic.twitter.com/uSA63VDU3x

9:30 EgyptAir hijacker is a professor of veterinary medicine at the Alexandria University- University website Reuters

9:20
“It looks like at least 49 of the passengers have been freed.That is all I have to say,” Cypriot President Nicos Anastasiades is quoted by Reuters news agency.

9:15
AFP reports witnesses said the hijacker threw a letter written in Arabic, asking for it to be delivered to his ex-wife who is from Cyprus.

8:33
Between 15 to 20 people left on board hijacked Egypt Airplane- Cyprus Foreign Ministry

8:20
“The negotiations with the hijacker have resulted in the release of all the plane passengers with the exception of the crew and five foreigners,“
the airline said in a statement. Reuters

Negotiations with the kidnapped result in the release of all the passengers, except the crew and four foreigners.

While in coverage, we did not receive a squawk 7500 signal from #MS181. https://t.co/ZAfjZmVBSJ pic.twitter.com/eNcDWEJswl

8:00
A passenger with a suicide belt threatened the pilot of a hijacked EgyptAir plane that was diverted to Cyprus on Tuesday, the Civil Aviation Ministry said.

In a statement, the ministry said pilot Omar al-Gammal had informed authorities that he was threatened by a passenger who possessed a suicide belt and forced him to land in Larnaca. Reuters

An EgyptAir domestic flight from Alexandria to Cairo was hijacked on Tuesday and landed in Cyprus, state radio said.

Civil aviation and police sources say the plane was hijacked by one person. A passenger threatened to blow his belt.

The Cyprus Broadcasting Corporation reported that 55 people were on board, with a crew of 7.
There were earlier reports of about 80 to 81 people on board.

At least one man was thought to be armed. The hijacking occurred in Cyprus’s flight information region and the airliner was diverted to Larnaca.

The hijackers contacted the control tower at 8:30 (05:30 GMT) and the domestic flight from Alexandria was allowed to land at 8:50, according to police.

The hijacker has not made any requests yet.