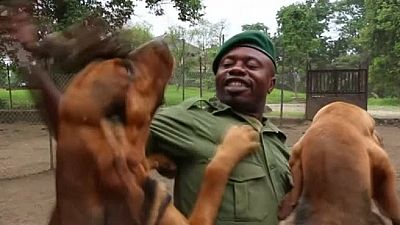 The fight by African countries hit by poaching continues as governments adopt new strategies to halt the practice.

The Virunga National Park in the Democratic Republic of Congo has for many years been a target for poachers. But the park’s rangers have now found a new way of catching poachers – bloodhounds.

The canines constitute a new unit who work with the park rangers to protect the vulnerable wildlife species from poachers.

Head of the Park Canine Section, David Twiringire Nezehose told Reuters: “I was directly assigned to the special team of the canine section, and I became spellbound by the mission these dogs execute in the park, it really touched me, especially since I did not like dogs before.”

The canine unit tracks down illegal poachers by picking up scents of animals that have been killed as well as that of the perpetrators leading to their arrest.

The UNESCO world heritage site is home to some of the world’s few remaining mountain gorillas as well as the endangered zebra-like okapi.

Poaching is also affecting the elephant population in the park.

Virunga National Park’s Chief Warden, Emmanuel de Merode, said they have not been successful in safeguarding the elephant population explaining “it is continuing to decline. We’re trying very, very hard to address that but the price of ivory is an enormous challenge to overcome given the number of uncontrolled armed men in the park.”

The dogs come in handy in a park where only 250 rangers expected to cover more than 7,000 square kilometres of land.

Execution of 2 #rangers in Virunga NP by anti-government #rebels pushes death toll in the DRC to 150 #poaching https://t.co/y7747Gy78n

According to National Geographic, at least 150 rangers have lost their lives in the line of duty.