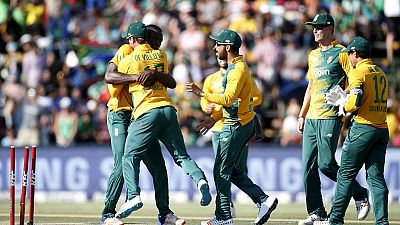 As the action continues at the 2016 International Cricket Council (ICC) World Twenty20 tournament in India, South Africa team leader, Faf du Plessis said every team had a chance to lift the World’s tournament adding that India is the favourite.

“This is probably the most open it’s ever been. I do think that India will still be favourites. Just the way we (are) playing, and obviously the form of the Indian team is, but you know, it’s going to be a real open pool in both groups,” he said .

This is probably the most open it's ever been. I do think that India will still be favourites.

The South Africa team, the Proteas have often entered global championships in limited-overs formats among a more favoured side during the past two decades.

However, they have picked up an unwanted reputation and then blowing their chances.

“So for me, it is just about, we have shown over a period of time, now, that we play better under the pressure moments and we have done that well as a T20 team, especially. So, I’d like to think we have overcome that (South Africa not performing well in major tournaments) hurdle mentally,”

The Proteas have hit purple patch with victories in nine of their last 11 completed Twenty20 games since January 2015, including series wins in Bangladesh and India, as well as home successes against England.

South Africa open their campaign against England on March 18.

The sixth edition of the ICC world Twenty20 is the first to be hosted by India and is being held in seven cities. The 2016 competition would feature sixteen teams, 10 teams qualified automatically, while another 6 qualified through the 2015 world qualifier.