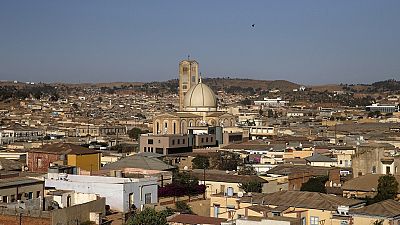 In an often forgotten corner of the Horn of Africa, Eritrea’s capital boasts one of the world’s finest collections of early 20th century architecture and the authorities want it declared a UNESCO World Heritage Site.

When Italy’s colonial experiment in Eritrea ended in 1941, it left behind an array of Rationalist, Futurist, Art Deco and other Modernist styles in Asmara, a city whose historic art has changed little since the Italians lived and worked there.

This. The “Miami of Eritrea”. ERITREA guys. Good god this is great. Refreshing and unexpected, no? #Unesco #artdeco https://t.co/5e87nsDDHh

Saint Joseph Cathedral can be seen in a distance. Italian buildings dating back to the colonial era can be seen, and so is the futuristic service station, designed on the model of an airplane taking off.

Some several years ago, Asmara was known as the ‘‘Piccola Roma’‘ or ‘‘Little Rome,’‘ because of its architecture, which today attracts and fascinates tourists.

The slow development of the city has preserved its buildings: most of them have remained in good condition since the beginning of the independence between Eritrea and Ethiopia in 1961.

Cheucheurs, a group together under the project ‘‘Heritage Asmara’‘ are trying to save the remains lacking renovation, prompting the government to classify the city to the rank of United Nations Education Science and Cultural Organization (UNESCO) World Heritage.

Seeking to mirror the bigger and older empires of Britain and France, Eritrea was Italy’s route “to enter the big business of imperialism,” said Federico Niglia, a history professor at Luiss University in Rome.

Coinciding with a period when there was an “explosion of art” in Italy, Asmara’s architecture was one way to show off Italy’s approach to colonial management, he added.

But Italy’s ambitions lay beyond Eritrea, which was seen as simply the starting point of a far grander empire in East Africa. It had long had its eyes on Ethiopia next door, a nation it briefly occupied from 1936 until it was ejected in 1941.

Unlike Asmara, a city Italians shaped during several decades there, Addis Ababa’s soaring skyline and rapid expansion have overshadowed the few reminders of Ethiopia’s brush with Italian rule.