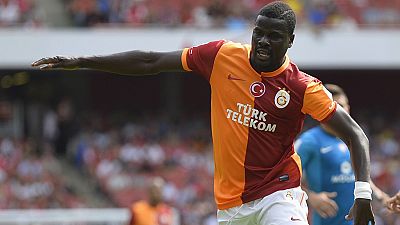 English premier league side Sunderland have completed the signing of former Arsenal and Ivory Coast defender Emmanuel Eboue on a deal until the end of the season.

The 32-year-old, joins Sam Allardyce’s relegation-threatened club on a short-term deal after training with the team for a month.

GALLERY: Head behind the scenes as Eboue puts pen to paper – https://t.co/LT2GW77d6C pic.twitter.com/x1TdpnQjPB

The former Arsenal full-back left the Premier League in 2011 for Galatasaray.

He was let go by the Turkish giants last summer and has been without a club ever since.

According to new signing Emmanuel Eboue, Sunderland must play hard and fight for their right to stay in the Premier League.

“When I came here for the first time it felt like I’d been here already so I’m very happy to sign for the club,” said Eboue. “I was dreaming about it [returning to the Premier League] and thinking about it when I was in Turkey because I played here before, so I thank God, my new teammates and also the staff and everybody else who took me in like a son.

“I also thank the manager who has given me a second chance, so I hope I can give my best for the club and also for him,” he added.

Sunderland sit 17th place on the Premier League table, just one point above the relegation zone with nine matches of the season remaining.

Eboue has been capped almost 80 times for the Ivory Coast and has represented his country at the 2006 and 2010 World Cups.