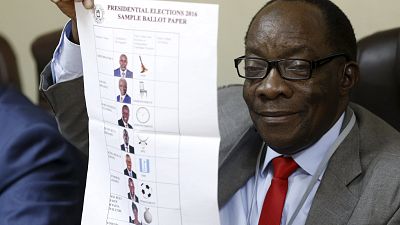 It’s a week to the National elections in Uganda, and a number of Human rights advocates are worried about the persistent violence in the country.

Ugandans were shocked last month when the Inspector General of Police, Kale Kayihura was quoted to have said “If the opposition wanted war, they would give crime preventers gun”.

Crime preventers is a youth force created to supplement the police force.

Secretary General of the ruling party, Kasule Lumumba had also announced on radio that “The state will kill children, your children” if they protest election results.

Although both Kayihura and Lumumba said they were misquoted,many were unhappy with the statement.

A program officer with the Human Rights Network in Uganda, Patrick Tumwine, said such rhetoric has also been made by resident district commissioners, appointed by the president to oversee local communities.

“If this is not stopped, if the Electoral Commission does not come out strongly to condemn and also stop different camps and different candidates stop making hate speech and statements, these are likely to cause violence” he said.

Ugandan Police Force spokesperson, Fred Enanga said they meet every day to evaluate the situation in the country and to find out if there are warning signs.

“As we talk now we’ve policed over 900 presidential and parliamentary campaigns and out of those we’ve had less than 10 cases where violence was registered” he explained.

Supporters of Uganda’s main opposition presidential candidate Kizza Besigye of the Forum for Democratic Change (FDC) party marched through Gaba Road during a campaign rally in the capital Kampala on February 10, ahead of the February 18 presidential election.

However, Human Rights Watch has asked President Yoweri Museveni and other high ranking officials to unambiguously call for peace and reaffirm the right to freedom of assembly.

So far, the nation’s leaders have not commented on the issue.