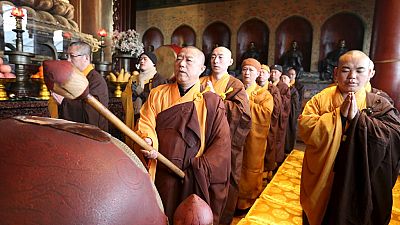 Taiwan has held a memorial service for victims of last weekend’s earthquake that claimed more than 90 lives.

The service was attended by president Ma Ying-jeou and president-elect Tsai Ing-wen.

The photographs of victims paraded a table in Tainan city where the earthquake occurred. Relatives of the deceased lit incense and bowed before the victims’ photographs.

We are mainly helping them identify the bodies and leading them to their seats, also helping with some relevant administrative procedures.

Majority of the dead are said to have been residents of the Weiguan Golden Dragon apartment complex, the only structure to collapse during the magnitude 6.4 earthquake.

“We have to realize the impermanence (of things). Bad things will pass and good things will last. We (have to) leave our sadness and grief behind, and revive our hearts again. We have to leave the past behind so that we can create a beautiful future,” Guo Su-hao, a volunteer in the rescue effort said.

A number of people are still unaccounted for and are presumed to be trapped under the debris. More than 500 people were injured. The quake was also felt in the capital Taipei.

The government has launched a probe into whether the construction of the building aided to its collapse.

“We are mainly helping them identify the bodies and leading them to their seats, also helping with some relevant administrative procedures. We are assisting psychologists and social workers from the health bureau in helping (the victims’ friends),” said Sun Shuo-hung, a member of the Chinese Christian Evangelistic Association.